What Is Bitcoin Dust & Why Is There So Much of It? | Exolix
HomeBlogArticle
Academy

What Is Bitcoin Dust & Why Is There So Much of It? 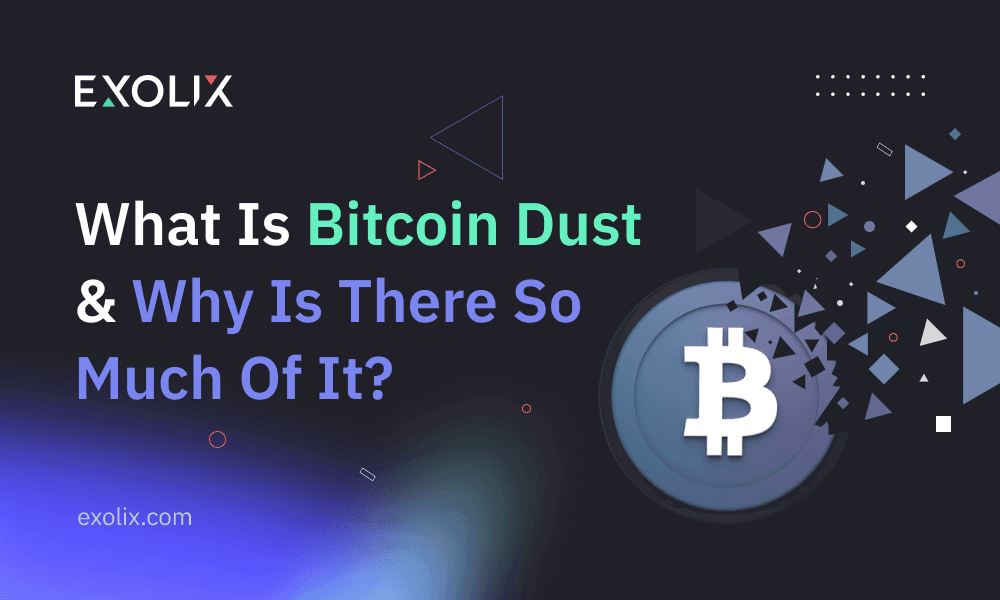 When you study decentralized finance and blockchain technology, you may come across the term “dusting.” When it comes to crypto, what is dusting? This is a niche yet important question. In the technically developed world, сyber attacks on users have become more complex and harder to detect than ever. Let’s dive deeper into the concept of dust and sophisticated dusting attacks using Bitcoin as an example.

Since Bitcoin is decentralized and open, anyone can join the network and create a wallet without providing personal information. This contributes to making Bitcoin somewhat anonymous, but unfortunately, not completely. Although it is not always easy to reveal a user’s identity behind each address, all Bitcoin transactions are posted publicly, so any person who wants to see it can do so. Since Bitcoin is not a closed private ledger, it is often subject to dusting attacks that aim at deanonymizing users.

What Is Cryptocurrency Dust?

Dust in the crypto world refers to a tiny amount of coins or tokens. Users often don’t notice that this small amount has been deposited into their accounts. Let’s take Bitcoin as an example. The smallest amount of a Bitcoin is 1 Satoshi, while 1 BTC equals 100,000,000 Satoshi. In this case, the term dust may apply to any amount between one and several thousand Satoshi.

Why Is There So Much Cryptocurrency Dust?

On the crypto exchange, the tiny amounts of tokens or coins that get stuck on a user’s account are also called dust. They inevitably appear when users execute trading orders and convert or swap tokens. Traders do not like them since dust balances are not exchangeable; however, Binance users can easily convert them to BNB with a 2% fee.

When it comes to Bitcoin, there is no single definition of dust, as each software or client may apply varying thresholds. To have some more clarification, the Bitcoin Core defined dust as a transaction output that is lower than a transaction fee. That’s why there is a concept of a dust limit. From a technical point of view, the dust limit is usually anything from 294 to 546 Satoshi. This means that any transaction that is equal to or is less than this will be marked as spam and will most likely be canceled by the validating nodes.

BTC dust attack refers to an activity when an attacker attempts to break the privacy of crypto users by sending so-called dust transactions to their wallets. Although the term dusting attack was initially only used when talking about Bitcoin, this type of malicious activity is also possible with other cryptocurrencies which run on the top of traceable public blockchains.

The most effective way to protect yourself from BTC dust attacks:

How Does a Bitcoin Dusting Attack Work?

Any crypto wallet has multiple addresses, and the first step of a dusting attack is to reach as many targets as possible. A large number of targeted users receive dust transactions, and then attackers trace down the funds they send. It is not an easy task since they need to perform an analysis of a huge amount of data to understand which addresses belong to the same wallet and the same user.

The eventual purpose of dusting is to link wallets to companies and individuals. The knowledge that attackers get during this process can be used against the crypto owner either through phishing attacks or cyber extortion threats.

Interestingly, dusting is not always related to these threats because authorities and governmental agencies may crack the flow of cryptocurrency funds inside the country or between countries and ultimately detect illegal activity. Some research labs and even private centralized companies also may use it to deanonymize networks and collect the statistics they need.

Privacy is becoming more and more valuable for all of us, and this is especially true for cryptocurrency holders and traders. The industry is connected with finance, and people want to stay secure.

The Bitcoin blockchain is virtually impossible to crack or disrupt, but user wallets often pose a serious problem. As a rule, users don’t provide personal information when creating a new wallet, so they will not be able to prove theft if an attacker gets access to their coins or to return anonymity if someone reveals their identity.

Dusting and some other deanonymization attacks are not the only problems, so it is also important to be aware of security threats that exist in the crypto space, for example, ransomware and phishing.

What Is a Dust Attack Bitcoin?

The term dust attack refers to thoughtful multi-stage schemes of personal data extraction made by hackers. Users receive a small amount of crypto; meanwhile, attackers try to detect who the wallet owner is and deanonymize him or her.

Do I Have Crypto Dust on Exolix Exchange?

Yes, cryptocurrency dust has nothing to do with a particular exchange. The term just refers to a tiny amount of BTC or other tokens. Also, the transactions are performed on the blockchain network, so users may face tokens that get stuck on their accounts after making trading orders or conversions.

How Do I Stay Protected from Dusting Attacks?

Protect yourself with reliable antivirus software and two-factor authentication and use encryption and create sub-wallets to distribute your assets. If you find that an insignificant amount of BTC or other currency has appeared in your wallet, do not move, convert, or sell it. This way, you will prevent the attackers from tracing all your wallets.