How does delegated proof of stake work?
HomeBlogArticle
Investing

How does delegated proof of stake work? 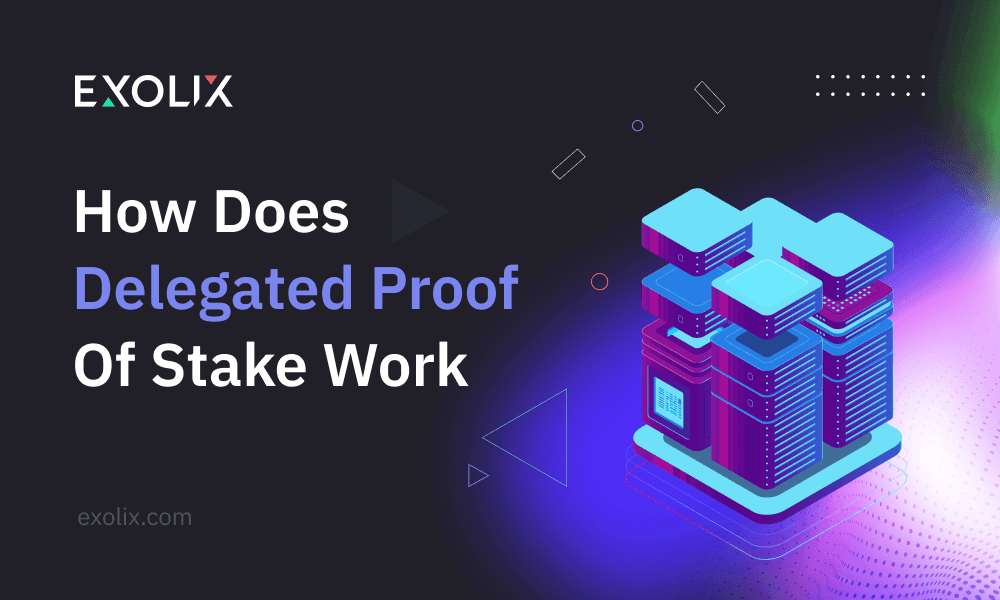 Delegated proof-of-stake is an innovative consensus mechanism designed to overcome several critical disadvantages of its progenitors: namely, proof of stake and proof of work. While the proof of work mechanism had its distinctive advantages, its efficiency and the environmental impact left much to be desired. The sheer volume of calculations necessary to convert, verify, and transfer cryptocurrencies created serious problems in terms of environmental pollution and crippled the potential for future innovations. Proof of stake emerged as a more affordable, efficient, and democracy-oriented solution. As for the delegated proof of work (DPoS) mechanism, it represents the next evolutionary stage of the already progressive scheme.

What Is Delegated Proof Of Stake

Therefore, what is delegated proof of stake? In general, it functions very similarly to the traditional proof of stake mechanism albeit with a couple of significant changes, such as voting and delegation mechanics. Conceived in 2013 and presented in 2014 by Daniel Larimer (a famous American software developer), DPoS adds a new layer of security to the traditional PoS, while also maintaining a desirably low level of energy consumption. While proof of work protocols force users to complete numerous mathematical operations to validate transactions, PoS protocols employ validators. The chosen validators verify all transactions based on the number of coins they have managed to stake. All owners of the delegated proof of stake coins may vote for the chosen delegates, promoting their reputation within the network. Many experts remained rather skeptical about how will proof of stake work in comparison with the classic mechanism. Nonetheless, the switch from proof of work (PoW) to proof of stake (PoS) performed by the Ethereum blockchain provided reliable proof of its efficiency.

Advantages of Delegated Proof of Stake

Shortcomings of Delegated Proof of Stake

How Proof Of Stake Work

The best way to understand how does delegated proof of stake work, is to look closer at its crucial components. We already know that this network increases its security and efficiency by selecting some trustworthy members, which play the main role in block verification. The actual process is more sophisticated and involves validators, delegates, voting, and witnesses.

Although each network uses its unique voting techniques, there are two main groups of voting methods:

Participants vote for certain nodes, which obtain the role of witnesses. These blocks are responsible for the validation of transactions and the creation of new blocks. Each time the witnesses finish validating all transactions in one block, they receive rewards, which are also shared with their voters. If a particular witness fails to complete all verification processes within a specified period, they obtain no reward.

In a delegated proof of stake system, delegates are considered responsible for all governing and maintaining functions. The delegates are chosen based on the voting procedure in which all users may participate. Furthermore, delegates obtain certain privileges, which allow them to introduce major changes. For instance, delegates may propose various modifications, changing the block size or the share of rewards for successful verification. Once delegates put forward their propositions, blockchain users may vote to decide whether the offered changes are worth implementing.

The main role of witnesses is to secure and validate the blockchain. Interestingly enough, virtually anyone may become a witness: you do not even have to possess any cryptocurrency to participate in a blockchain as a witness. The total number of witnesses depends on the size of the network. In general, a blockchain network hosts 21-101 witnesses. Records of all successful transactions performed by witnesses are recorded in the ledger. The main resource of any witness is their reputation: users vote continually and it is possible to exclude a witness from a network if users suspect that something fishy is going on or find a witness with a better reputation.

Validators make sure that all newly created blocks comply with consensus rules. As always, considering how proof of stake work, validators are selected among all users in a democratic procedure. Users chosen as new block validators should run a validator node to provide reliable verification within the system.

The delegated proof of stake technology provides a much more reliable and effective alternative as opposed to the robust yet obsolete proof of work consensus mechanism. Among its main benefits, we find increased energy efficiency, better security, improved flexibility, and higher transaction speed. The last point deserves emphasis: delegated proof of work systems function with greater speed. For instance, let us look closer at a delegated proof of stake example. An average transaction in the TRON blockchain, which is based on the DPoS mechanism, lasts no longer than a minute. On the contrary, to swap coins within the PoS-based USD Coin blockchain one has to wait at least five minutes. Therefore, considering that faster transactions and reliable security along with decreased energy consumption have already become matters of top-tier priority, DPoS systems have all the chances to outrace the opponents and provide a leading solution for the cryptocurrency market.

What are the advantages of the delegated proof of stake in comparison with proof of work?

The consensus mechanisms in question use completely different protocols. Therefore, they have a long list of meaningful differences. In brief: * DPoS offers much greater energy efficiency. For instance, Bitcoin wastes approximately $1 million per day to secure its transactions. Implementation of the DPoS mechanism makes it possible to cut such expanses. * DPoS has more reliable security protocols. * The DPoS mechanism provides a democratic alternative and significantly reduces major risks associated with excessive centralization. * DPoS is much more flexible. It creates a platform for various techniques capable of improving the effectiveness and security of the network

How can I participate?

Becoming a cryptocurrency investor is a remarkably easy task. Visit a trusted cryptocurrency exchange platform, such as Exolix, obtain the cryptocurrency, which supports the delegated proof of stake work mechanism (Ethereum being the most popular example), and participate in transactions or staking.

Is it possible to use the DPoS mechanism in private chains?

The DPoS mechanism may be successfully implemented in private chains, the only difference being that instead of a traditional validation scheme, the chosen network would have to start with a set of trusted users as prime validators.

Do validators get penalized for malicious behavior?

Yes, those validators who propose multiple blocks (engaging in a process known as equivocating) or submit contradictory votes are punished. The system features the so-called “slashing” mechanism that reduces the number of staked coins belonging to misbehaving validators.