What Is the Difference Between BTC and BTC SegWit?
HomeBlogArticle
Academy

What Is the Difference Between BTC and BTC SegWit? 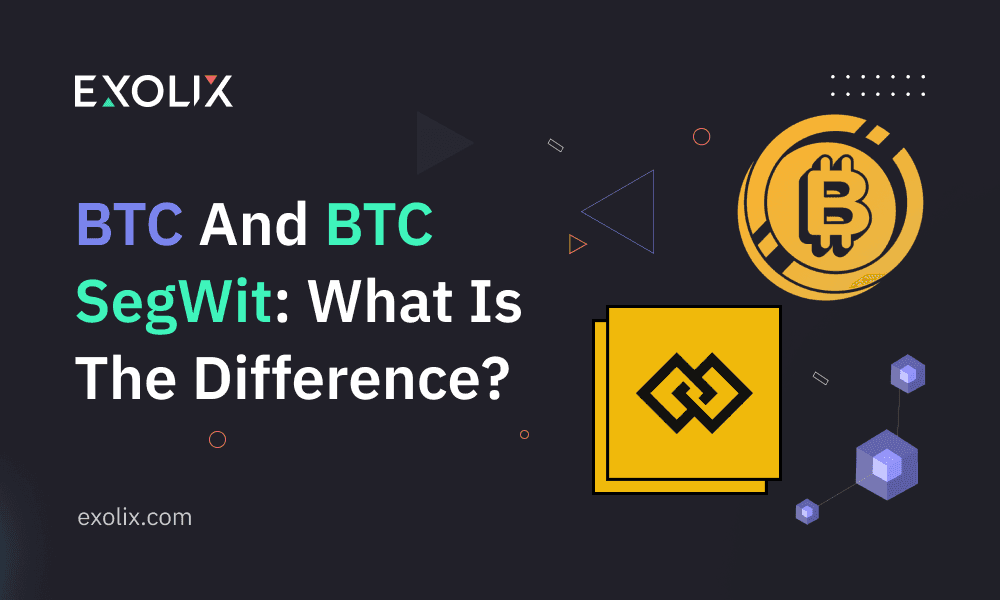 In the crypto community, the term SegWit (or BTC SegWit or Segregated Witness) is used to refer to an alteration in the transaction format of Bitcoin. The need for SegWit creation was caused by certain limitations of BTC. The new protocol decreases the amount of time it takes to process transactions, so every time you swap and exchange crypto, your transactions are performed much more quickly. The increased capacity of the blocks within the blockchain also has a positive impact on a well-known blockchain issue known as transaction malleability.

When looking at the main differences between BTC and BTC SegWit, people need to put their minds to it and understand what each of them stands for. Understanding BTC SegWit is pivotal, as it can help crypto newbies start using cryptocurrency the right way and avoid any unwanted problems that could be related to the inherent shortcomings of blockchain technology.

Why Was BTC SegWit Created?

As briefly mentioned above, there were several major reasons why this new transaction format was created. Before its creation, crypto enthusiasts could only use one kind of address to carry out BTC transactions – Legacy (P2PKH). That’s why you might hear people discussing SegWit and Legacy BTC. “Legacy” is a word that is much easier to memorize than P2PKH or any other name that could be used for the original version.

The relatively small size of the original BTC blocks eventually led to network congestion, meaning that the processing time gradually increased. The transactions could not be processed as quickly as before due to the fact that interest in BTC was growing larger over time. That meant that the congestion would only increase as the transactions became more numerous and, as a result, they became more difficult to process.

The solution was introduced in the form of an additional layer. A certain percentage of transactional data will now be deployed on an additional layer to reduce the burden on the main network. That offloaded data was comprised of the witness data, otherwise known as SegWit (or segregated witness).

To sum it up, here’s how it happened:

Now that we have briefly explained the nature of SegWit and the reasons for its creation, let’s underline its biggest distinction from the original BTC.

To summarize, BTC SegWit offers several advantages over BTC Legacy. But is it a better option overall? Let’s discuss that below.

Which Option is Better? Should You Use BTC SegWit or BTC Legacy?

This is hardly one of the hot takes that you are used to seeing from the Exolix team. It is pretty obvious that BTC SegWit offers a multitude of advantages over BTC Legacy, but the reality is that both are quite interesting options to consider. It certainly is interesting to learn the full story and understand the difference between the two.

The number and the sheer impact of all the improvements made during the transaction to BTC SegWit speak for themselves. Quicker transaction speed, lowered fees, increased security, and other features instantly made BTC Legacy seem obsolete to at least some subset of crypto investors and entrepreneurs. That’s why there is a common opinion that the BTC SegWit is the superior option.

What Is Legacy Bitcoin?

Legacy Bitcoin (or Legacy BTC) is the term that people use to refer to original BTC addresses. Even though the newer version, BTC SegWit, is a clear improvement over the original, some people still use Legacy BTC addresses. It must be noted that both types of addresses fully support sending and receiving money from one another.

Should I Use a SegWit or Legacy BTC Address?

The difference between BTC and BTC SegWit is that the latter outperforms the initial version. Expert opinion is that you should use the better BTC SegWit because it is smart to pay lower fees and have fast transactions. From a purely technical standpoint, Legacy is the inferior option, so it is advisable to use BTC SegWit.

What Happens If You Send SegWit to Legacy?

Your transaction will be processed. One of the best things about SegWit addresses is that they are backward compatible. It means that you can send BTC to Legacy and easily transfer your funds from a BTC Legacy address to a BTC SegWit one.