What is a hard fork in blockchain
HomeBlogArticle
Academy

What is a hard fork in cryptocurrency? 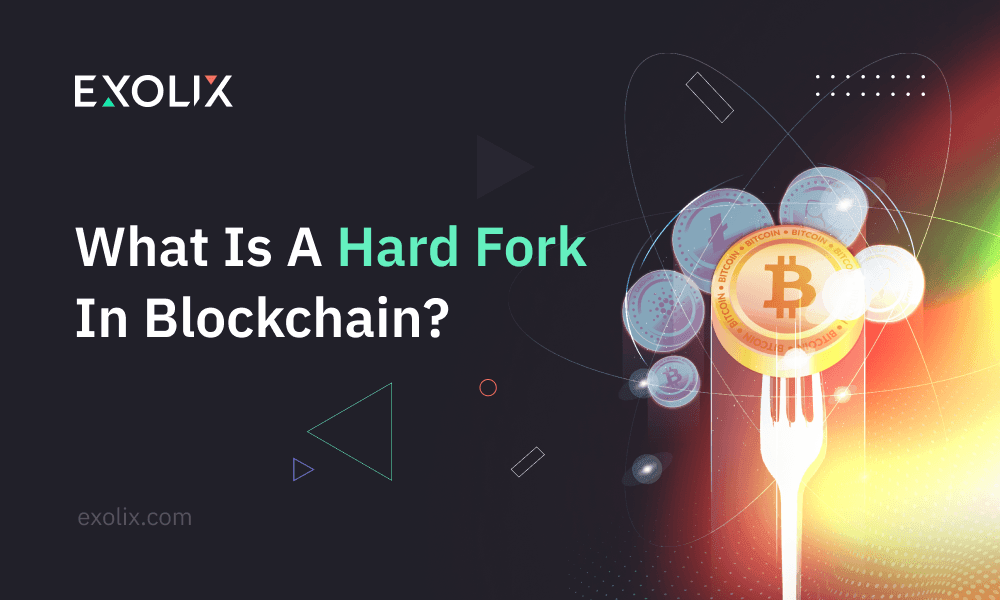 Cryptocurrencies have always been on the cutting edge of technological advancement. However, even these advanced projects still need regular updates and improvements, which keep them up with the times. Forks are the most notable examples of such improvements. Moreover, we have seen a great number of historical forks during recent years, some of which have the potential to change the entire structure of the cryptocurrency universe (the Merge organized by Ethereum being the most prominent of the lot). Hence, it is time to learn what does a hard fork mean in crypto and what all the fuss is about.

Blockchain hard fork: What is it?

A fork is a radical transformation of the existing network protocols that changes the validity of blocks. Blockchain developers must reach a consensus to provide transactions and maintain all the governing functions of the network. When forks happen the entire blockchain splits, creating two independent systems. The first system works by the same old rules, whereas the new network functions according to the recently implemented changes. A hard fork is an insanely complicated process that requires coordinated actions of multiple developers. However, from the users’ standpoint, it looks deceptively simple: you get an opportunity to select which set of rules suits you most and decide whether the change is indeed necessary. Forks are exceptionally important for the development of blockchains. After all, blockchains are all about decentralization. Because of that, there is no central entity capable of deciding how and when to add new changes to the protocols. The flow of time renders even the most advanced strategies obsolete. Hence, the only way to keep up is to introduce changes, moving towards higher efficiency.

There are two types of blockchain forks:

Admittedly, these processes are quite similar. Although soft forks are much simpler, in the majority of cases users call for a hard fork: the latter indeed requires a mind-blowing amount of computational power, yet the advanced privacy gained as a result of such a fork easily outweighs the cons. Hard forks:

On the other hand, soft forks:

What is a hard fork in crypto: notable examples

Hard forks happen for many reasons. In most cases, forks are driven by the necessity to keep up with innovative security procedures, the need to resolve false transactions, add new functionalities, or deal with existing disagreements within the network. Furthermore, hard forks may happen accidentally. For instance, two miners working on the same block may provide two different sets of data. As a result, the blockchains split in two due to the lack of consensus. Hence, let us look closer at the most notable examples of hard forks, which have affected billions in assets.

This hard fork happened because of a scalability problem left in Bitcoin by its creator Satoshi Nakamoto. The 1-megabyte cap significantly slowed down transactions, limiting their number and increasing fees. However, the famous SegWit (which stands for “segregated witness”) patch resolved this problem in 2017. It was originally designed to deal with the so-called “Transaction Malleability” — a flaw in code, which made it possible to change the digital signature of the receiver before the confirmation of the said transaction. Furthermore, this patch significantly increased the cap for Bitcoin blocks. However, several nods did not agree with the new set of rules. As a result, what was intended as a soft fork quickly became a hard fork: despite numerous attempts, both sides simply could not reach an agreement. Thus, Bitcoin Cash was born. The creation of BCH (Bitcoin Cash) clearly illustrates the key principles of hard forks. The changes were implemented, some nodes decided to disagree, the chain divided, and a new digital currency spawned out of thin air. However, the original blockchain did not suffer any grave consequences, apart from some users migrating to the new chain. You can check it for yourself on Exolix or any other trustworthy cryptocurrency exchange platform: both cryptocurrencies manage to coexist, despite originating from the very same source.

Ethereum Classic appeared because of a hack, which targeted funds of the Decentralized Autonomous Organization. On June 17, 2016, a group of hackers effectively stole 3.6 million out of 12.7 million Ethereum coins raised by the Decentralized Autonomous Organization. The network was quite new at the time, and the situation was desperate. Therefore, Buterin himself decided to interfere and introduce a piece of code, which would block the stolen funds. However, the anonymous hacker threatened lawsuits against anyone attempting to prevent the funds from moving. In addition, they offered rewards for those miners who would reject any soft forks, capable of separating them from the stolen goods. The situation escalated more and more until the Ethereum community agreed on a hard fork to restore the stolen coins to the original investors. Since some nodes did not comply, the blockchain was divided, creating two new branches: Ethereum and Ethereum Classic. Once again, you can check both coins on Exolix and compare their strengths and witnesses.

What is a hard fork in blockchain?

A hard fork is a massive upgrade that splits the original chain in two, which leads to the appearance of two independent chains with different protocols.

Cryptocurrency exchange platforms decide whether to support hard forks on an individual basis. In some cases, the entire crypto community may split in two, mirroring the structure of a renewed blockchain: this is exactly what happened during the Ethereum Merge when miners decided to vote against the changes.

Usually, reliable cryptocurrency exchange platforms provide full support for progressive changes, intended to make the networks faster, more efficient, and more democratic. Visit Exolix, where you will find a list of forked coins supported by the platform, which you are free to convert without any limits.

What type of forks is better; hard forks or soft forks?

There is no easy answer to this question: the subtle differences between these processes are numerous and each situation calls for a separate analysis. As of today, the rivalry between both methods is in full swing. Soft forks provide some notable opportunities, allowing users to control the evolution of their networks with more precision and mitigating the harsh consequences of the democratic method of governance. On the other hand, hard forks allow for faster and more secure advances.

Who can start a hard fork?

Forks may be created not only by developers but also by ordinary users. Thanks to the decentralized structure of blockchains, users may decide for themselves what changes should be adopted or rejected, exercising their democratic functions within a network.