What is a 51 attack in blockchain?
HomeBlogArticle
Academy 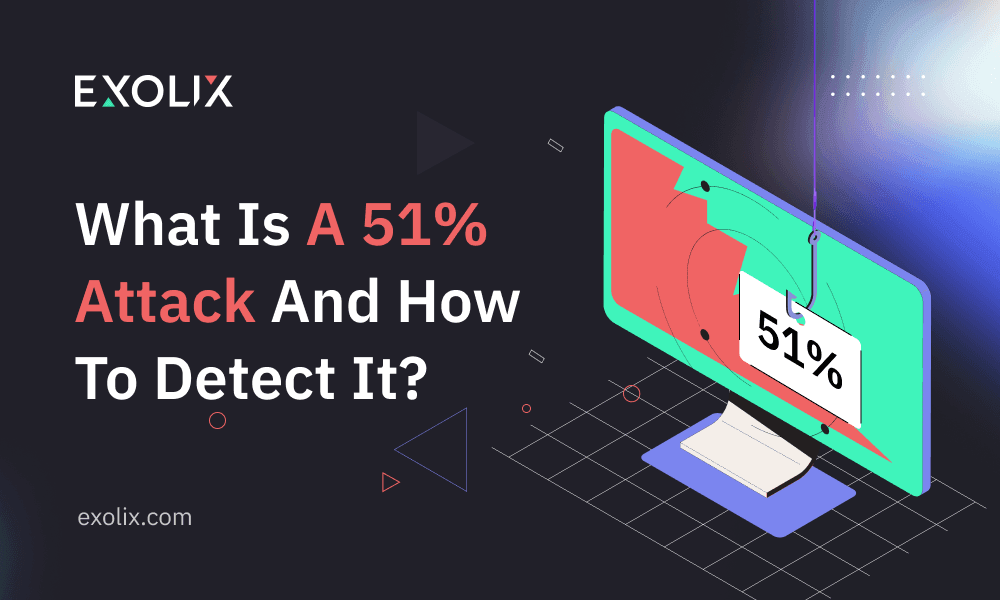 In short, blockchain is where data is stored in blocks and interlinked together to build an information chain. In the world of crypto trading, various blockchains are used to document cryptocurrency transactions. In order to add blocks and receive financial rewards, you need to “mine”. Each system of several mining machines has a set hash rate, i.e. the combined speed of all mining machines within a network.

A 51% attack is called so because it’s carried out by people that accumulate more than 50% of the network’s overall mining/computing power or hash rate. If successful, the attackers can pretty much rule over the entire network, influencing transactions and disrupting certain markets and cryptocurrencies.

Despite what some experts say, 51% attacks are far from a hypothetical problem. We already have a couple of really big ones:

We already have surface-level knowledge of what a 51 attack is and that it rocked several smaller cryptos in the past. Now let’s give you a more detailed understanding of how it all works in the world of blockchain.

As mentioned above, in order for crypto transactions to occur, freshly mined blocks have to be validated by a consensus of mining machines in the network. When the validation finally happens, the block is added to the chain.

Blockchain operates on a total decentralization basis, which means that the entire system that stores information regarding transactions is as much decentralized as a network’s hash rate is. When a certain miner or a group of miners takes control of over 50% of the total hash rate, the crypto network is in peril. Attackers can:

Any of the above-mentioned harmful actions can result in a lot of value being lost. When a 51% attack is launched, it’s a huge reason for concerns not only for investors but for the crypto community as a whole.

User Side: What Are 51 Attacks?

You have to know that there are certain risks involved if you are a crypto investor. 51% attacks, as unlikely as they might be, are one of them. You should take them into consideration while investing in minor coins or taking part in a network’s activity.

These types of attacks are rare because they are extremely costly, so experts urging you to convert all your crypto assets into cash probably don’t have the best understanding of how any of it works. Of course, if you are sure about your security, you might deliberately stay away from small and suspicious cryptocurrencies. The possibility of more popular crypto being attacked is almost zero.

Overall, what is a 51 attack crypto? Now you understand that it is a type of fraudulent hacker activity that has little impact on your life but you still need to be aware of it. Let’s talk about the main prevention methods and address some of the most popular questions.

Can a 51% Attack Be Detected or Prevented?

Yes, a 51% attack can be both detected and prevented. The detection methods are nowhere near as important as the methods that allow people to fully deter such attacks. Key prevention methods include:

Harnessing the power of the community. With PoS and a strong community, it's MUCH harder to carry out a successful attack. The community has to vote to determine if a person can be a block validator (the same thing as a miner in PoW systems). If the community is suspicious of someone (due to them accumulating power to carry out the attack), they can simply kick them out.

Just like Frankie, the Exolix blog says “relax”! Jokes aside, even though these attacks have occurred, the chances of any significant 51% attack happening in the near future are very slim.

There have been several 51% attacks in the past, all of which caused the cryptocurrency world to become a little more cautious. To minimize the risks, you have to avoid unproven cryptos, always think about your security, and always use proven crypto exchange platforms, such as Exolix, Binance, Huobi and others.

Yes, this is possible, but it is highly unlikely. Profit-wise, it makes more sense to go after currencies with less involvement and mainstream exposure. It’s easier to accumulate more than 50% of hashing power when a coin is very much out of the spotlight. An interesting website called Crypto51 calculates the cost of one hour of a 51% attack on every currency. The estimated cost to attack Bitcoin is $757,530 an hour.