Why The Ethereum Platform Is So Popular
HomeBlogArticle
Academy

Why The Ethereum Platform Is So Popular 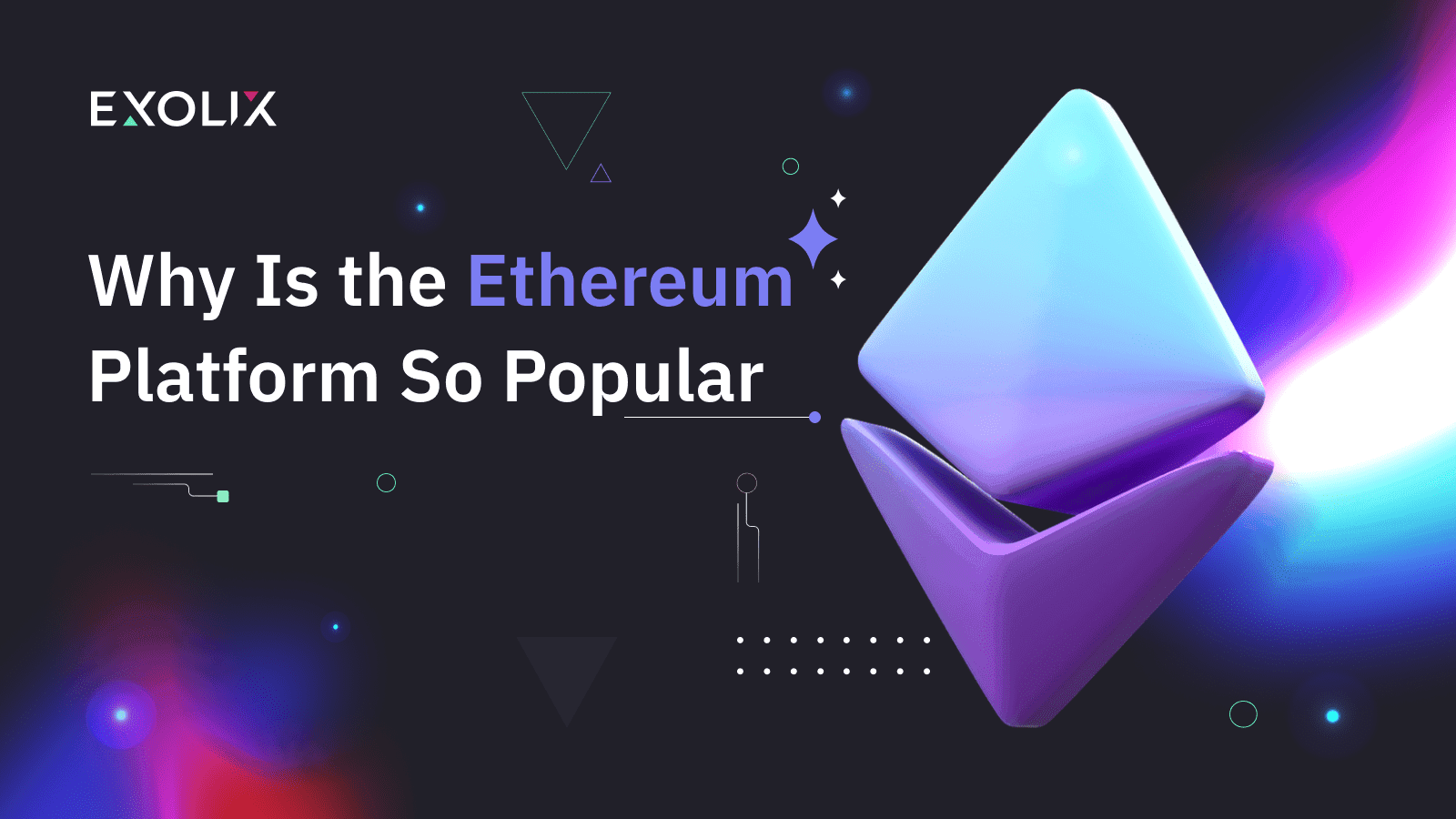 The Reasons Why The Ethereum Platform Is So Popular

When answering the question of what Ethereum is, one may say simply that it's a cryptocurrency; another one would refer to it as a blockchain ideal to run decentralized applications. Some would associate Ethereum with different tokens based on the network. Let’s delve into the Ethereum platform development and explore what Ethereum is and why it is so successful.

Ethereum is a large blockchain network that was developed to expand the use of blockchain technology rather than just to compete with Bitcoin in the field of cryptocurrency. With all respect to Bitcoin's innovativeness, its network doesn't offer many opportunities. Meanwhile, Ethereum was designed to allow people to create and run their own applications and smart contracts without a third party.

A young programmer named Vitalik Buterin developed the idea of cryptocurrencies. Ethereum was launched in 2015 with an initial capital of 72 million Ether. Although Ethereum uses the same principles as other networks, the main difference is the ability to create applications based on it. It has its own currency called Ether, sometimes referred to as Ethereum, which is a bit confusing. Ether is a utility token created to make payments. Apart from the fact that it is Bitcoin's closest competitor by market capitalization, it has some interesting features. On Ethereum, it is possible to mint stable coins, utility tokens, or newly stormed into the crypto-marked non-fungible tokens (NFTs). The system is characterized by its reliability and readiness for change.

How To Buy Ether?

The largest decentralized exchanges and trading platforms like Coinbase, Binance, Kucoin, Huobi, and others offer their services for buying and selling Ether. To buy Ether, you need to take several steps:

There is a peer-to-peer (P2P) transaction option. In this case, you will need the appropriate section on the trading platform. Peer-to-peer network technology allows multiple devices to communicate directly with each other without an intermediary. Such a process is not much more complicated than buying Ether through an exchange. You choose the currency you want to buy, the currency you will pay with, and check the possibility of transferring directly to the recipient's bank. In addition, you can benefit from the course difference with this type of transaction.

How To Store Ether?

The number of altcoins has increased significantly, so we witness the rise of the popularity of multi-currency wallets. For example, the Ethereum network has multi-currency storage that supports various tokens. The cryptocurrency wallet is a personal interface that provides reliable storage and makes transactions possible. Several options differ in their speed of operation, the purpose of use, and security.

It’s possible to store your Ether offline in a hardware wallet, such as Trezor or Ledger. It is believed that this is the most reliable way to store cryptocurrencies since all private keys and other data are inaccessible to hackers. A hardware wallet, or as it is also called a cold wallet, is an external portable device that can be connected to your computer when needed. It is equipped with a special anti-hacking program, which allows you to increase the level of customer security. Best of all, hardware wallets are suitable for long-term storage of crypto since the time of operations in the network with them is extended.

Desktop wallets are programs that can be downloaded and run locally on a PC. These wallets differ from some online versions as they give control over your keys and assets. Overall, desktop wallets can be considered more secure than most web adaptations. Crypto wallet developers create applications that synchronize with each other. The user can install the same wallet on the phone and PC and use a convenient option.

A paper wallet is a piece of paper containing a private key or a seed phrase that gives you access to your cryptocurrency assets associated with the wallet. According to the same logic as in the case of hardware wallets, paper wallets are considered among the most reliable ways to store digital coins. The creation of a paper wallet is relevant in cases of storing significant amounts of currency since an extreme level of security is required.

Online (web) wallets are accessible from anywhere in the world where there is the internet. This is very convenient for the constant use of cryptocurrency. Usually, hot wallets are easier to set up, access and accept more tokens. However, the hot wallets are also more vulnerable to hackers, possible manipulations, and other technical problems. Today, a popular, reliable, and fast crypto wallet is TrustWallet. It is a software-based hot wallet that allows you to store more than 40 varieties of cryptocurrencies and provides access to a decentralized exchange.

How Does Ethereum Work?

The Ethereum platform can be used for almost any purpose you would need a ledger for, such as simple or complex transactions, smart contracts, decentralized applications (DApps), and decentralized autonomous organizations (DAOs) development. Let's take a closer look at what mechanisms make up this system.

Smart contracts are similar to typical legal contracts, but digital and without the participation of a third party. This is code written most often in the Solidity programming language, which exists inside the Ethereum system, and its execution is guaranteed by the program. A smart contract is considered a reliable and useful tool. Through smart contracts, Ethereum company tends to expand the concept of cryptocurrency.

Ethereum simultaneously works on thousands of computing machines around the world; that is, it does not have a single owner. Ethereum was a pioneer of second-generation blockchains, and in addition to financial transactions, it provides a greater degree of programmability. Ethereum gives developers much more opportunities to experiment with their code. To reduce any risks, the Ethereum network introduced the concept of gas, the mechanism of additional commission fees. Anyone who's making a transaction or creating a token has to pay for the use of the Ethereum network in Ether. This is required for interacting with smart contracts, making transactions, developing DApps, etc. The Ethereum price of gas may vary, but a fixed minimum amount is required for each operation. Complex contracts require more gas than a simple transaction. Thus, the gas acts as a measure of computing power.

The role of the Ethereum Virtual Machine is to run smart contracts. The EVM is a state machine. In input, there is the state of the external blockchain; in the output, the state is updated after a transaction has been applied. Each transaction is processed by the EVM sequentially. The EVM checks the correctness of the transaction, calculates the new state of the blockchain, and saves it. To update the state, a special mechanism called mining is used. It is performed using the “Proof-of-Work” algorithm.

“Proof Of-Work” (PoW) is a mechanism that prevents double-spending. Most cryptocurrencies use it as a consensus algorithm, which serves as a method of protection. Since digital currencies are just data, it was necessary to prohibit copying and sending the same units to different places. With the PoW mechanism, we can track all transfers and record them in an open, decentralized ledger. Any block containing an invalid transaction will be automatically rejected.

Ether has a couple more differences from other cryptocurrencies. Ether has a no-issuance limit, and it cannot be replaced with other coins for its main use in Ethereum. A few years ago, this token practically did not exist outside of the Ethereum system, but nowadays, you can pay with Ether in some online stores or purchase gift cards for Amazon, Apple, and Uber, for instance.

Since Ether is a utility token, let's look at where it can be applied, in addition to transactions, token swaps, mining, and making purchases, and explore which companies use Ethereum.

The Defi ecosystem consists of financial instruments, such as services and applications created on the blockchain. Most of the Defi products are built on the same Ethereum foundation. This means that many products work together without any issues. You can borrow tokens on one platform and exchange them on another market or application. Based on the Ethereum network, Defi wallets, the best Ethereum tokens, and even entire organizations can be created.

The NFT segment brought significant popularity to the Ether network. NFTs hit the headlines in both the top Ethereum tokens and top Ethereum projects categories. They allowed for the tokenization of things like art, collectibles, and even real estate assets, making them unique, one-of-a-kind tokens. Initially, such tokens protected the copyright of the owners and could not be illegally duplicated but, at the same time, could be transferred or sold to a new owner. Since the Ethereum blockchain not only made it easy to create your own NFT and collections but also to protect them, the development of the system did not take long. Now it is even possible to develop your own marketplaces based on Ethereum.

With the advent of Ethereum, completely new ways of open cooperation through the internet have become possible. One such example is the DAOs, which are controlled by code similar to a computer program. To avoid hacker attacks, which, unfortunately, the Ethereum company had to face, the chain has undergone a division into two parts. In the new chain, malicious transactions were effectively canceled. Today, this chain is known as the Ethereum blockchain, while the one with the irreversibility of transactions is now called Ethereum Classic.

How OriginStamp Uses the Ethereum Blockchain

OriginStamp specializes in creating blockchain timestamps for businesses. It can provide timestamp files, data, or documents. Its goal is to prove the originality and lifetime of a digital asset. For this purpose, the Timestamp API allows you to add tamper-proof timestamps. In particular, it works with NFT and applications based on Ethereum.

Conclusion About The Ethereum Platform

Ethereum was launched in 2015 and since then has proved that it has long-running plans as well as ambitious goals. Thanks to its smart contract possibilities and the noble idea of creating a decentralized world, the Ethereum network has gained incredible popularity. This system includes the Ethereum blockchain, Ethereum crypto, called Ether, EVM that runs smart contracts, and a proof-of-work security mechanism. Thanks to its versatility and universality, Ethereum makes Defi DApps, DAOs, and marketplace developments possible. Despite gas prices, Ethereum remains the preferred option for users due to its security and reliability.