Terra (LUNA) - What Caused the Collapse? 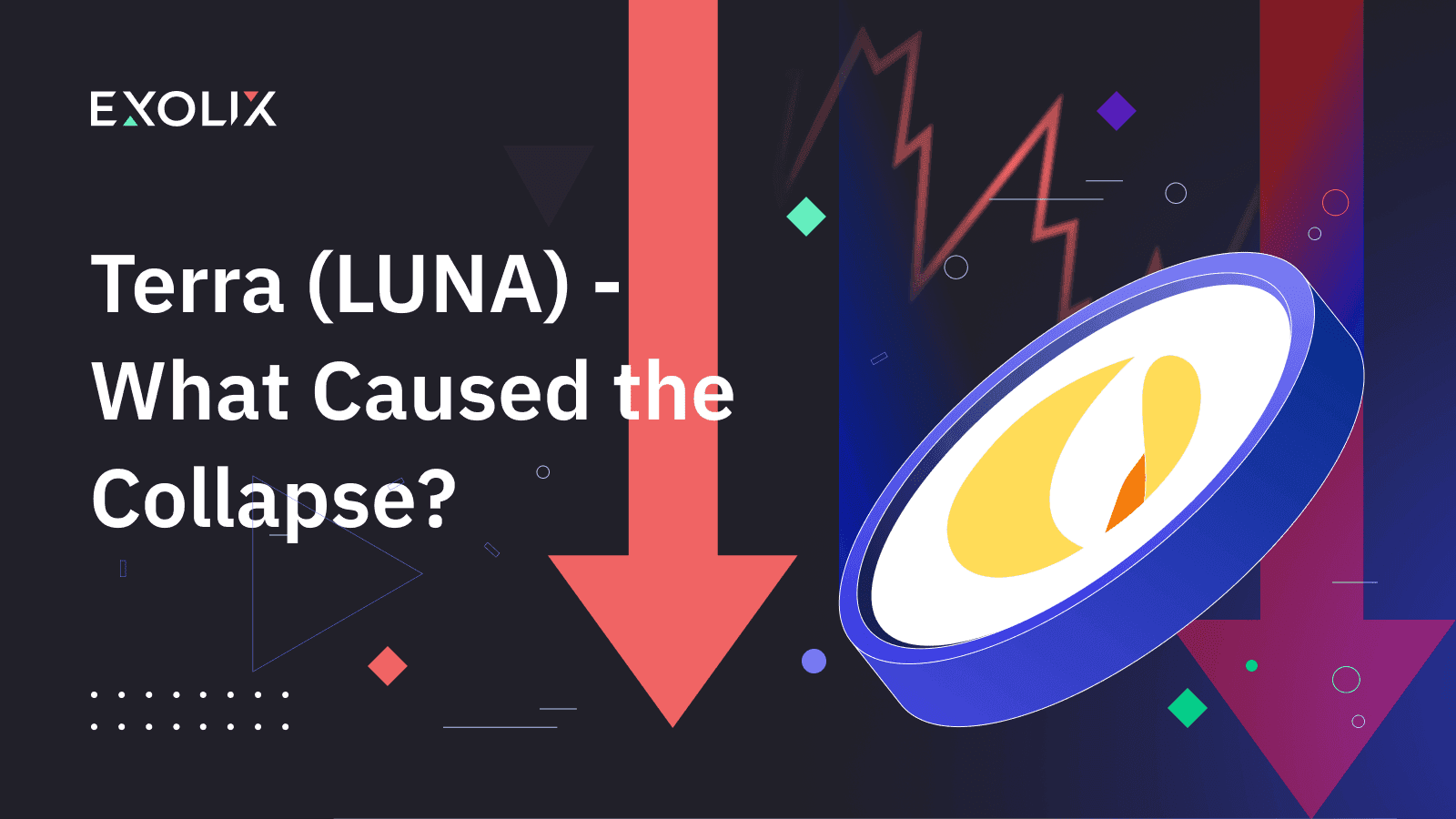 Terra (LUNA) - What Caused the Collapse?

At the beginning of May 2022, the crypto market drastically fell. In a week Bitcoin lost more than 1/3 of its value, and the price dropped from $39 000 to $26 000 — the lowest level since July 2021. All other coins also dropped. Many investors lost their savings; many companies faced asset inflation.

Of course, there are fundamental factors behind this fall — the global crisis, slower economic growth, and a fall in the main stock indices. However, on May 8th one more factor added to the global fall — a collapse of algorithmic stable coin UST and high-capitalized token LUNA. Almost nobody expected LUNA to be a scam. Together with their assets and investments, people lost confidence in stable coins.

Terra (LUNA) - What Has Happened?

Cryptocurrencies are high-risk assets. High crypto market volatility can crash the price of almost any token in some days or even hours. To limit the volatility and attract investors, the crypto market offered stable coins. With stable coins, investors can have digital money outside the traditional financial system but with all the benefits of crypto money.

Stable coins are digital money pegged to fiat money, commodities, or another cryptocurrency.

Terra ecosystem, a product of South Korean-based Terraform Labs, was launched in 2019. As a platform, Terra issued several stable coins pegged to various fiat currencies, including USD (the coin name is UST). A native Terra cryptocurrency LUNA should guarantee stability to the system: by selling LUNA, Terra attracted funds into the system to support stable coins and prevent depegging.

Just before the collapse, Terra won second place by TVL, just after Ethereum.

TVL - Total Value Locked, a measure that shows the cost of cryptocurrency locked in smart contracts, is a way to measure a DeFi platform capitalization.

Anchor protocol, a flagman project for Terra blockchain, was in third place in the DeFi Llama rating. Simply, the protocol offered rewards for the investments. It functioned as a bank deposit but offered higher interests because of its decentralized Terra nature.

In one week in May, the situation changed: UST lost its peg to USD, and related token Luna lost 99.9% of its value and was delisted and then stopped.

Terra Dragged Down Bitcoin and the Whole Crypto Market

To support the liquidity of UST, Luna Foundation Guard (LFG) provided two loans - $750 million in Bitcoin and $750 million in a stable coin. Unfortunately, these moves were not praised by the market. Following the crash of UST, the crypto market moved down. BTC tested the support level at $30 000. Most altcoins have fallen even faster. The market was in a panic.

Several organizations that supported the Terra ecosystem provided more funds — up to $2 billion — to support UST. LFG also tried to attract additional funds for system stabilization but failed. As a result, on May 10 UST price fell to $0.62, and the next day it reached $0.23.

On May 11 Do Kwon, Terraform Labs’ CEO, released the revival plan for UST. All UST holders can change it to 1:$1 in Luna and the issue of the LUNA token should be increased to meet the demand. After that the price of LUNA dropped below $0.50, UST continued moving down, and Anchor token, related to the Anchor project, also collapsed.

At this point, the crypto exchange service started delisting LUNA. No supporting measures could help. Investors continued money withdrawal from the Terra ecosystem, and the price of LUNA crashed.

LUNA Crash - a Scam, an Error, or the Result of an Attack?

It would be a mistake to say that no one expected a surprise from LUNA and UST. For example, FreddieRaynolds in the last months of 2021 wrote a series of tweets about the vulnerability of Terra to well-planned attacks with the use of significant capital.

FreddieRaynolds is a Twitter user who writes about crypto.

Now FreddieRaynolds celebrates he is right and asks for apologies from Do Kwon, who keeps silent.

Let us discuss some hypotheses about the possible reasons for the LUNA crash.

One of the crypto users with the nickname Hase mentioned that Terra is a Ponzi scheme worse than BitConnect.

BitConnect was an open-source cryptocurrency that appeared to be a Ponzi scheme.

Skeptics noticed that the principles of Anchor protocol looked like a Ponzi scheme — a high-yield investment project which pays interest to early clients with money of second-wave clients. The end of the Ponzi scheme is always the same: the benefiter(s) takes funds away and disappears. However, the evangelists of Anchor protocol claimed it was not a fraudulent scheme but the power of the DeFi system.

A Ponzi scheme does not require using reserve funds and other stabilizing measures. Moreover, the founders of Ponzi schemes usually disappear with all their money. Do Kwon stays home and tries to find solutions and compensate for the losses to the community.

An Error in the Algorithm?

Perhaps FreddieRaynolds is really right and the Terra system is vulnerable to well-planned attacks. UST was close to depeg before, but the system survived the first attempt to hack it. The attackers probably accumulated more funds to break it. Let us remind you of the story of George Soros, a billionaire, philanthropist, and market maker.

One day George Soros hacked the bank system of the United Kingdom. He started the rumor among the market players that the British pound will collapse soon. Then he started selling large volumes of GBP.

The price of GBP moved down and many investors started to panic because they decided it was a collapse. They started selling GBP, too, and Soros could buy GBP for a low price. Then the British government intervened in the market and made the pound restore its value with a loss of 15%. George Soros earned more than 1 billion in a day.

Since that time this type of market attack has been called by the name of Soros.

Did Luna Fall Victim to a Soros-Type Attack?

It is possible that Luna really fell victim to a Soros-type attack. We mentioned the suspicious funds' withdrawal from the Terra ecosystem to Ethereum. Do Kwon had to clarify these moves to the community, especially after the questions from Mudit Gupta, Polygon Chief Security Officer.

Do Kown confirmed that the company withdrew 150 million UST from Curve and then withdrew 100 million UST more to reduce the imbalance. However, he rejected Terraform Labs as being responsible for 84 million UST transactions to the Ethereum system.

Our step-by-step analysis of the LUNA collapse proves that panic played a significant role in LUNA collapse. So, the interest rate of the Anchor protocol decreased, then the panic started, and funds’ withdrawal and stabilizing measures pushed the panic up. Looks like a classic Soros-type attack!

Who Was the Attacker?

So, if Terra and LUNA were not a scam but a victim of an attack, who was behind it? The first thought was the founder. However, Do Kwon and other top managers of Terraform Labs are available; they have not disappeared with the money. Besides, they invested more than $10B into the system and launched a new one to restore the business.

Another option is a classic: the attack was planned by competitors. Market competition is severe in the crypto world, so if your competitors know about the vulnerability of your project, it will die. FreddieRaynolds may not have been the only person who noticed the vulnerability of the Terra ecosystem. Once the attackers checked the system and almost got it, but the second try was successful.

Some experts suppose a governmental institution was involved in the attack. Some governments are not interested in crypto investments because crypto assets suck funds from traditional assets.

The Hype over Decentralized Finance May Be Slowing

The market capitalization of the Terra coin was over $18 billion before the crash. Its sudden collapse became a black swan for the whole crypto market. The investor confidence was broken.

The collapse of the Terra ecosystem attracted the attention of market regulators and politicians. Treasury Secretary Janet Yellen commented on the situation and claimed the segment of stable coins requires better regulations to reduce volatility and support financial stability. It is likely that new regulations will appear this year.

LUNA also caused some problems in Chainlink, a decentralized network of crypto oracles. It could not process the prices below $0.01, so it could not provide the forecasts for all pairs with LUNA.

In general, the LUNA crash changed the market confidence in all stable coins. The investors understood that the safety of stable coins was overestimated.

The collapse of LUNA and UST is one of the most remarkable events in the history of the crypto industry. No DeFi project reached such a large size before it crashed. All saving measures could only speed up LUNA hyperinflation.

Terra was relaunched as Terra Classic, with a new token Luna Classic (LUNC). Its start price was $17.80, but in the first hours of trading, it lost 67% of its value. The optimistic forecast for it is to reach $10 by 2023. However, there are not many optimists for LUNC.

Terra has to solve two main problems. First, without the Anchor protocol, there is no use case behind the token. Investors just have no idea why they should buy LUNC, except for the trust in the project.

And here is the second problem. Do Kwon and his project lost the trust of the market. The idea of the LUNA scam will spoil all their further activities. So, the way to resurrection for LUNC is hard and may be impossible. The problem is not the link with fiat currency or technical components but the confidence of the crypto community.