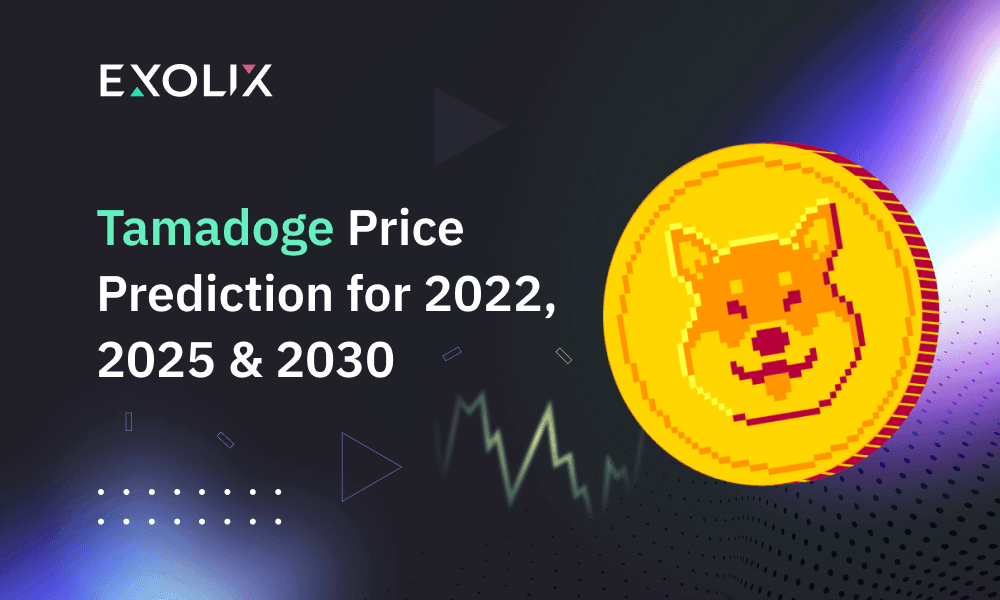 Every crypto enthusiast is looking for the next big thing, but it's not always easy to uncover those rare, undiscovered coins. Tamadoge (TAMA) is a thrilling and trendy new meme coin that has swept the crypto world since its presale launched on July 2. The play-to-earn cryptocurrency project has seen record-breaking buying activity in a short period of time, with a current trade volume of over $7 million.

Will the future show a breakthrough for Tamadoge as the next P2E Crypto? In this post, we'll explore the latest trending meme cryptocurrency and present Exolix's detailed Tamadoge price prediction crypto.

In August 2022, the Tamadoge presale went live, offering TAMA for $0.01 per token and with a target to raise $10,000,000 in total presale funds. TAMA's presale beta was one of the greatest of 2022, selling out its $2 million hard cap in just 10 days. As a result, the development group decided to raise its presale goals from $10 million to $19 million.

The price of TAMA tokens is increasing steadily as more are sold during the Tamadoge presale, which uses an incremental price increase system. The presale of Tamadoge, which ended on September 18, raised $19 million. The token's new price, $0.03, is a threefold gain over its initial value of $0.01. Investors that purchase Tamadoge during its pre-sale phase will benefit from a dramatic price increase immediately.

The official Tamadoge Twitter account revealed on September 23 that TAMA would be listed on OKX, a prominent crypto exchange with over 20 million users. As a result of the listing, investors all around the world will have access to Tamadoge.

To provide the most precise Tamadoge price prediction possible, we will analyze several key factors that are expected to have a major impact on the price of TAMA in the coming months.

Once it hits the open market and exchange listings commence, TAMA is likely to be the next cryptocurrency to skyrocket, as Tamadoge has one of the strongest communities in crypto. As of the time of writing, Tamadoge has a confirmed listing on the centralized exchange (CEX) OKX, and with intentions for a regular stream of listings, it stands to reason that this list will only grow in time.

TAMA's price increased from $0.03 to $0.04 during the presale, and another hike is expected once the Metaverse and P2E games are released. In Q4 of 2022, you can expect to see the launch of the Tamadoge store and NFT pets. Because of this, TAMA will become increasingly scarce as players stockpile tokens ahead of the 5% burn rate on in-store revenue that will go into effect soon.

Since the Tamadoge presale attracted so much attention, the release of the P2E game is also expected to spark people's curiosity. Therefore, it is reasonable to expect Tamadoge to trade at roughly $0.05 by the end of the year. However, a low of $0.03 and a high of $0.06 are also feasible, depending on the state of the cryptocurrency market at that moment.

Our Tamadoge price prediction for 2023 becomes even more fascinating as the time comes nearer. Now that the presale is over, our expectations for Tamadoge in 2023 center on the release of new features.

The Tamadoge team plans to launch a massive effort in the first and second quarters of 2023 to attract prominent Metaverse collaborations. The specifics of these relationships have not been disclosed, although Tamadoge may work with ongoing Metaverse-focused initiatives. Bringing Tamadoge to a new audience like this has the potential to greatly increase demand.

In the first half of 2023, Tamadoge will focus on facilitating centralized exchange (CEX) listings alongside a series of Metaverse partnerships. Depending on the size of the exchange, listing a cryptocurrency can increase its value by as much as 300%.

Tamadoge employs the ERC-20 standard for exchange listings and has no fees or taxes for transactions. In addition, the team has prepared ahead of time by setting aside 20% of the total TAMA supply (400 million tokens) for liquidity in anticipation of these listings. As a result, becoming listed on the CEX should be rather simple.

Tamadoge P2E will launch as a browser-based game, with a companion mobile app with augmented reality (AR) features following later in 2023. Thanks to this, Tamadoge will be able to attract more people who enjoy playing games on their mobile devices. If Tamadoge can capture even a small percentage of the nearly 2.2 billion individuals who play mobile games each month, it will quickly become the most popular and successful cryptocurrency game.

In addition to the features listed above, Tamadoge will also offer many P2E arcade games that can be purchased. Tamadoge can connect with a larger audience since it gives players more options.

In light of this information, highs of $0.10 are realistic, with lows likely to again touch the $0.05 mark, assuming Tamadoge can succeed with a few excellent CEX listings, Metaverse alliances, and expansion into the mobile market.

By the year 2025, Tamadoge will have established itself as a top meme coin. After three years, the project will have had sufficient time to stabilize and begin rolling out all its intended features.

Long-term investors in Tamadoge will find that the project's low 2 billion TAMA supply and 5% burn rate are among the most fascinating parts of the project. As more people use the mobile app and play the P2E arcade games after their debut in 2023, Tamadoge is anticipated to make a lot more money from in-store purchases, leading to a considerably higher rate of token burn. With less TAMA available, we should expect higher long-term prices.

A precise Tamadoge price prediction for 2030 is difficult to make, but we have given serious thought to some elements crucial to Tamadoge's continued growth.

First off, it is obvious that the team has a vision for the future. Of the total 2 billion TAMA available for the project, 600 million have been reserved and will be released in stages over a decade to pay for the upkeep and expansion of Tamadoge. This indicates well for Tamadoge's future success and suggests it will continue rising.

As we said before, Tamadoge has a burn rate of 5% on all in-game store revenue. If Tamadoge can draw as many players as Axie Infinity, $5 million in revenue per work seems well within reach.

In addition, the expanding markets for virtual and augmented reality applications and cryptocurrencies bode well for Tamadoge's future expansion. It's tough to say for sure what Tamadoge's value will be in the future, but considering the state of the market, the project's burn rate, and its expected future growth: a range of $0.60–$1.20 seems reasonable.

The cryptocurrency Tamadoge (TAMA) has the potential to rise to the top of the cryptocurrency market. The results of our Tamadoge crypto price prediction show that Tamadoge presents a golden chance. There is still time to buy in at a discount before the project is officially listed on the exchange, especially since the introduction of the new feature has increased interest.

Due to the uncertainty and volatility of the crypto markets, investors should do their homework before deciding to swap or convert their money into cryptocurrencies.

Tamadoge coin price may increase to $0.10 by 2023 when the majority of the project's features are scheduled for release. However, if the market is still in a slump, we might see TAMA trading at about $0.05.

TAMA might hit $0.10. While it won't be an easy road to double digits, a sequence of well-timed agreements and exchange listings might boost TAMA's price up to $0.10 by 2023.