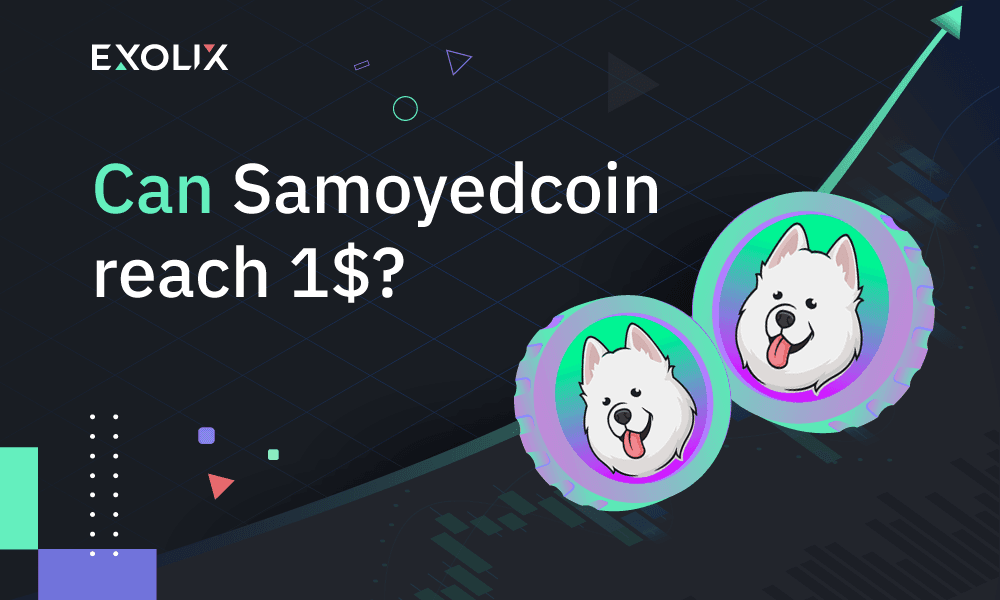 Experts predict that the Samoyed coin (SAMO) can reach a cent, maybe even $1 in the coming years. It’s hard to say with the volatility of the crypto market, but this article will explore the idea of it being realistic or just wishful thinking. If you are considering buying into Samoyed coin, then there are several questions you’ll want to be answered before you do so—questions about its future viability as an investment and what factors influence the coin’s value. This guide will also attempt to answer these questions by examining various aspects of the currency and its underlying technology—its fundamentals, so to speak.

What Is a Samoyed Coin?

A Samoyed coin is a cryptocurrency that aims to be as transparent and decentralized as possible. There are many coins on the market, but most of them have the same flaws. They can be hacked, or they are centralized and don't allow for a truly democratic process. These coins have also failed to address the fundamental problem of true digital scarcity. Many of these coins will never reach $100 because there will always be more created. The goal with the Samoyed coin is to create a currency that people want to use and hold onto - not just try out. It is valuable, scarce, and useful. You can exchange cryptocurrencies on platforms like Exolix. Simply convert USD to SAMO; once your transaction is complete, you can store SAMO in your crypto wallet.

Samoyed was created in 2021 in honor of cryptocurrency tycoon Sam Bankman-Fried and Solana Co-Founder Anatoly Yakovenko during the growth of meme coins. SAMO changed from a "meme coin" to an experimental Web 3.0 community coin after seeing the possibilities of online networks, the benefits of Solana, and the impact meme coins have on bringing on new market players, promoting their underlying blockchain, and permeating contemporary culture. From its foundation, SAMO is a new digital commodity that supports a society focused on integrating Solana users, educating market participants, forming connections with one another, and assisting one another with daily tasks. Not only is it the fastest, most effective, and environmentally friendly form of dog money in the crypto industry, but it plans to be Solana's ambassador as well.

Can Samoyed Coin Reach A Penny?

As of October 26th, 2022 (the time of writing for this article) the price of SAMO was $0.006565. Many analysts believe that SAMO can increase at significant rates in the future since it has not yet reached its full potential. Here are some of their opinions regarding SAMO's value in the coming years and whether it will reach a dollar or not.

According to Wallet Investor, SAMO may soon surpass its previous record high. The platform predicts that SAMO might increase to $0.35 by the end of this year. In the long run, they forecast that SAMO's price might rise by more than 350% from where it is now and maybe even reach $0.90.

Similar to Wallet Investor, Digital Coin Price believes SAMO will increase over time and approach $0.80. With this price and rising circulation, SAMO might quickly move up the top 50 market rankings.

Can Samoyed Coin Reach A Dollar?

It's interesting to note that SAMO started a 54% burn plan of the maximum supply to commemorate the beginning of the Solana summer since this occurred in July 2021. Intriguingly, every month on a random day, 500 million tokens are burned. That means that throughout the upcoming months, 500 million tokens will be burned on a spontaneous day each month, which is fascinating. Additionally, Samo is dipping his toes into the NFT trend, which is what has mostly made Solana successful. You can see that by working with Solana Art, Samoyed NFT, which has a poor back buyback and burn mechanism, SAMO continues to become a community-driven coin. The buyback and burn method though could lead to some scarcity for the Samoyed coin due to the popularity of NFTs, and that is the most intriguing aspect of the project in general outside of the well. On the Solana blockchain, it is the first meme dogecoin. The long-term value of Samoyed coin may rise, according to Coin Data Flow. They claim that the price movement of Bitcoin will have the biggest impact on the SAMO price in the future. According to the annual average growth rate for BTC, SAMO might increase to $30 if it experiences 100% of that growth. That is less guaranteed than it would be with a 20% gain in Bitcoin, however. With such expansion, SAMO may surpass $1 by 2025.

Samoyed coin is also supported by Coinskid. According to their predictions, SAMO might increase to $0.40 by the end of 2022. In terms of the following five years, they predict that SAMO may approach $3. According to Priceprediction. net, SAMO will only reach $1 by 2026. Nevertheless, they estimate that SAMO might increase to $6 by 2030. Samoyed coin is thoroughly examined by YouTuber Tactical Investing, which also discusses how promising it is. He says that Somayed, which lives in the Solana habitat, might be the next Shiba Inu. This suggests that SAMO may soon rank among the top 50 websites. Tactical Investing argues that SAMO has the potential to surpass $1 and that traders may even drive its price up, but only to about $10 in the foreseeable future. Conclusion By compiling the predictions of experts together, it is clear that Samoyed (SAMO) crypto has great growth potential; however, it is not expected to reach $100, even in the long run. The crypto industry has become extremely saturated in the past five years, which could be a major reason limiting the growth of smaller cryptos like SAMO. Investors either stick to safer options like BTC and ETH or decide to diversify their portfolios. In the latter, they have so many options to choose from which means they buy less of each. Thus, the price of cryptos like SAMO remains low. With that in mind, it is still a viable option for investors because, unlike competitors, SAMO shows consistent upward projections which means that it is stable with few fluctuations in price.

Yes, many industry experts predict that SAMO will reach $1 in the next few years, most likely by 2025.

Is Samoyed a good investment?

Yes, even though SAMO is fairly new, it is built on a secure blockchain. All experts predict the future growth of the coin, making it a good choice for investment.

Is Samoyed a serious crypto?

Despite being a meme coin, Samoyed has become a recognized player in the industry. This can be gauged from its substantial growth in the past year, despite being introduced in 2021.