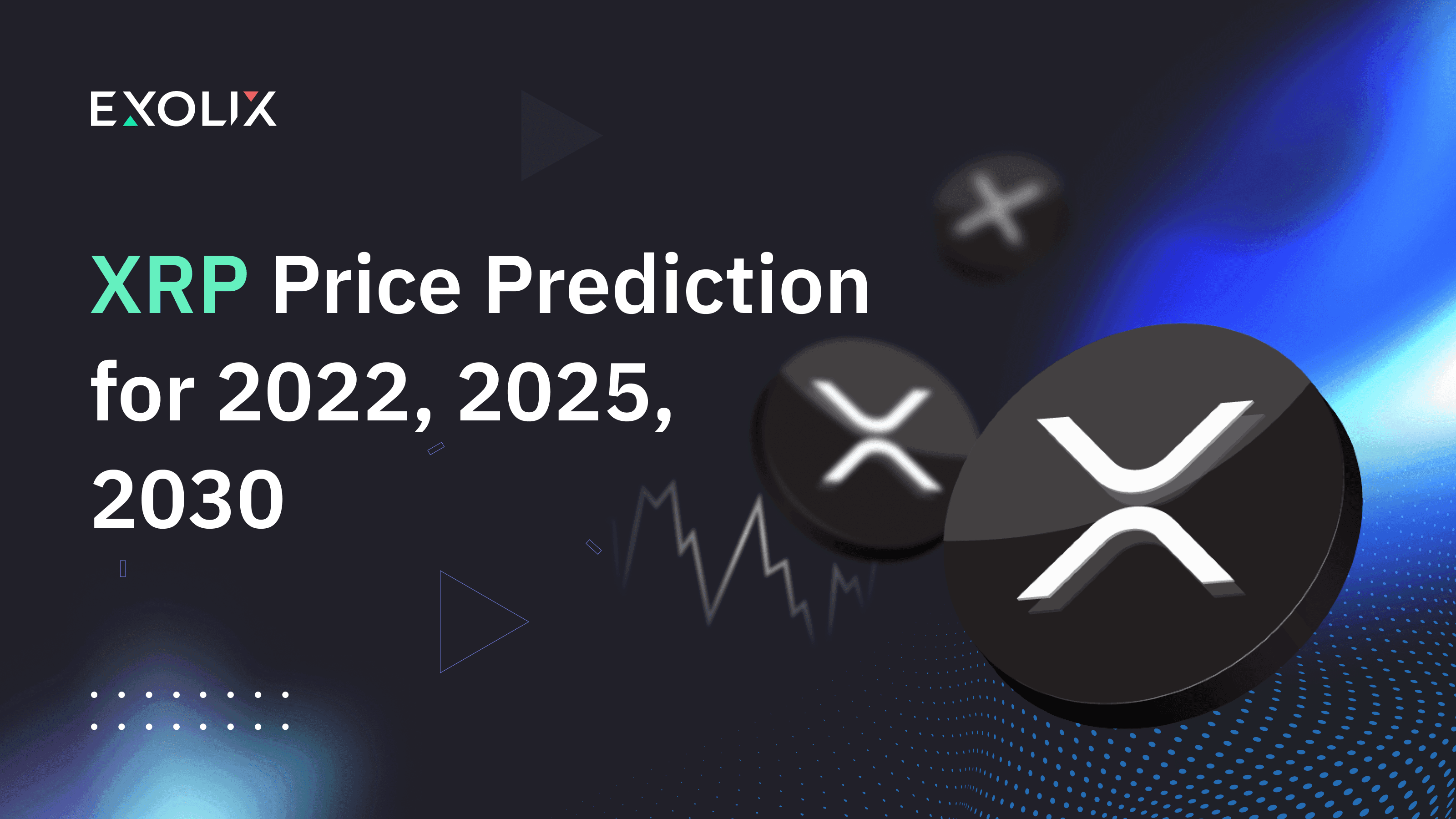 Emerging technologies like cryptocurrencies have the potential to revamp a range of sectors in the near future. A cryptocurrency known as Ripple, or XRP, is attempting to revolutionize the cross-border payments business through its use of crypto assets.

If you've already invested in cryptocurrency or plan to do so now that prices are so low, you might be interested in learning about Ripple (XRP) price predictions and how XRP coins could perform in the future.

Before we start with an XRP price prediction, let's examine its price history and technical and fundamental analysis in this guide!

What Is XRP Cryptocurrency?

Ripple is powered by RippleNet, an open-source distributed database built on Ripple's digital payment network. For one thing, it doesn't have to be mined because it isn't built on the blockchain. The Ripple Network's native currency is XRP.

There are no "proof of work" requirements for transactions using XRP, as it is a centralized cryptocurrency. Multiple confirmations aren't required for the consensus and verification procedure. As a result, Ripple processes transactions more quickly than most other cryptocurrencies, including Solana, which some cryptocurrency experts say could be the next Bitcoin.

On its website, Ripple refers to itself as a "utility for the new global economy" and was created to be swift, efficient, and "the most practical cryptocurrency for applications across the financial services space."

How To Buy Ripple?

Many exchanges allow you to buy XRP with either fiat currency or a cryptocurrency of your choice. In addition to the exchanges, you can also use the XRP ledger platform from Ripple as a decentralized exchange that enables peer-to-peer buying.

In the early years of XRP's inception, the coin's value was so low that it was worthless. Tokens were only worth about $0.01 until 2017 when the asset's value skyrocketed as the media began to pay attention to it more extensively. At the same time, it took advantage of the boom in the crypto market that year. XRP had climbed to $0.05 by April 2017, and the steady growth continued until it reached $0.25 in May.

It was at this point that the asset had reached a point of no return, as crypto lovers began to notice its worth and potential and began to invest in XRP. As of January 2018, the asset's value had risen to a new high of $3.84, continuing a trend that began in 2017. However, this was quickly followed by a steep decline in value that affected all other cryptocurrencies. As of the end of this year, XRP was trading at around $0.30 per coin, with no significant fluctuations.

Nonetheless, the bullish growth of 2020, which started at the end of the year, made the XRP price soar. Before the year ended, the token had a value of $0.80. Due to the announcement of the SEC's lawsuit, this rise was not expected to continue at the beginning of 2021.

Exchanges began to remove XRP after the announcement. Several people who had the coin sold it because of fear. Because of this, XRP's value dropped in early 2021, only to rise again as the crypto sector took off.

Since then, XRP has proven that it still has a large following, doing admirably during all of the previous bull runs. Its average price even climbed in March 2022.

Future price movements of XRP are heavily dependent on the outcome of the litigation. But the coin has demonstrated that despite all the bad press, it can survive and even thrive.

For the upcoming few years, our experts present a long-term XRP price estimate. Even if the growth rate isn't as strong as it has been in the history of cryptocurrencies, analysts are still optimistic. Failure to reach $2.00 in 2022 does not imply that it will never succeed. Long-term XRP forecasts are more optimistic than short-term ones.

Out of the whole 100 billion Ripple tokens, 47.9 billion have already been distributed. This indicates that over half of the total has already been minted, boosting the likelihood of a long-term price increase.

According to the XRP price forecast for 2023, XRP will fall between $0.70 and $0.83 on average. XRP prices in 2024 are predicted to range between $1.01 and $1.22 based on a technical analysis performed by cryptocurrency specialists on the currency's prices. The typical estimated trading cost is $1.05.

As long as Ripple Labs continues to work with other companies and organizations, $4.00 could be on its way very soon.

Ripple Price Prediction for the end of August 2022

According to our Ripple XRP price prediction, the cryptocurrency meltdown will take some time to recover from. The bearish pricing will not be lucrative or break even within a few months if they continue in their downward trajectory. During August, the average trading price may be about $0.35, with a possible high of $0.38.

The price history of Ripple has been a very useful resource for our XRP forecast. The bear market may be coming to an end by now. XRP's price is expected to hit a top of $0.40 and a low of $0.38 shortly.

Are you curious how much XRP will be valued in October 2022? We have an answer! The Ripple coin is expected to reach a high of around $0.395, and a low of around $0.37, at the beginning of the last quarter. However, the rate of recovery for XRP tokens will be minimal. The bear market's negative impact may begin to fade.

XRP tokens could be in high demand in November, which could lead to an increase in the Ripple price. We expect the price of XRP to reach a high of $0.44 and a low of $0.42 in November 2022. As XRP prices climb, so does the coin's market capitalization.

The XRP cryptocurrency market may be slightly booking profits after seeing a respectable price increase in the previous month. The Ripple coin may reach a maximum value of $0.42 and a minimum value of $0.40 in the near future. Investors' faith in XRP may have been slightly shaken due to its poor performance during the crash. That could soon change, though, since the price continues to rise.

For Ripple XRP price prediction in 2025, the currency’s price history and fluctuations throughout the previous years have been examined by cryptocurrency experts. The minimum and maximum XRP prices are projected to be $1.47 and $1.76 respectively in 2025. There will be an average trading cost of about $1.53.

Experts in the field of cryptocurrency are ready to give their Ripple price prediction 2030 after years of research. The minimum price it will trade for is $10.39, and the maximum price it might reach is $12.32. As a result, you can generally anticipate that in 2030, the price of XRP will be around $10.67.

Should You Invest in XRP?

During the past year, Ripple has proven to be one of the most active and dynamic cryptocurrencies. Ripple has a strong development team behind it and has already demonstrated proof of stake. The project focuses on getting it right the first time, whereas coins like Ethereum depend on trial and error to grow their ecosystem.

New release deployments will be a focus for Ripple developers in the second half of 2022 as they seek to increase smart contract performance and scalability. Ripple's director of public relations says the company plans to issue three major code drops this year, the first in February and the next two in June and October. The University of Illinois, Ethiopia, and New Balance are just a few of the noteworthy institutions that have already signed on with XRP.

Payment transaction costs are significantly lower thanks to Ripple's separation of the compute and settlement layers. To that end, it's safe to assume that XRP is a promising investment.

What is the Future of the Ripple Coin?

Ripple is expected to have a good future by the end of 2022, according to many experts. We may see a new high in Ripple's value as a result of further advancements in the Ripple ecosystem and the overall crypto asset market. In our opinion, Ripple has the potential to become one of the most bullish cryptocurrencies in the near future.

This article's information is not meant to serve as investment or financial advice. Investment choices should be made based on a person's financial needs, goals, and risk tolerance.