Overbought vs. Oversold Signals What Are the Differences
HomeBlogArticle
Academy 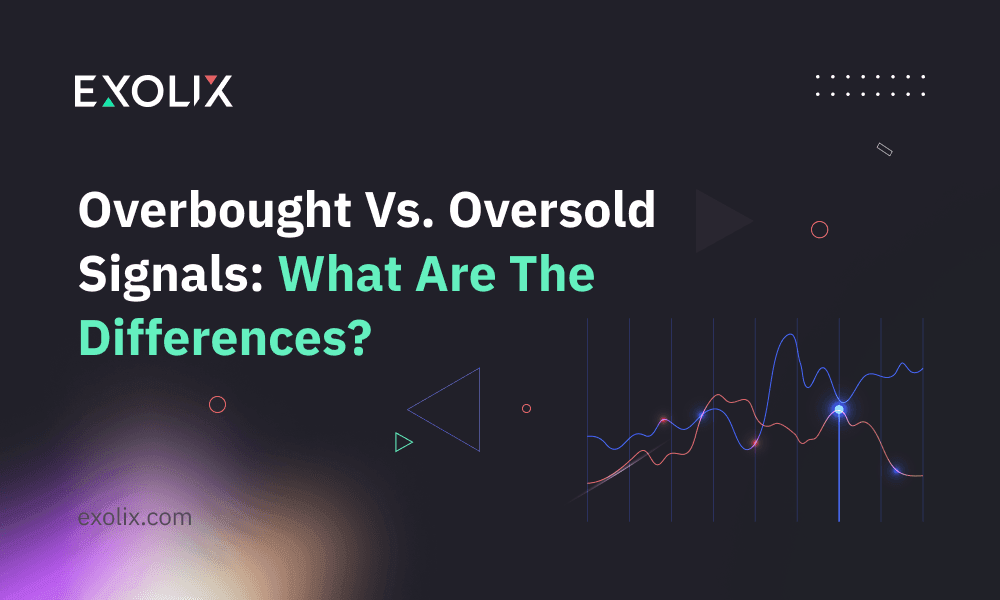 Probably the most significant priority in trading is about choosing the right entry and exit points. Sure thing, one can argue that trading as a whole is all about choosing the right moment. While this is undeniably true, these moments should be viewed as the most crucial ones. Let us say that you are searching for new promising investment opportunities through Exolix or other instant cryptocurrency exchange platforms. In such a situation, entry and exit points are always of key concern. They determine whether you will close the deal with a considerable profit or waste time and resources on a doomed enterprise. Among various indicators dedicated to the determination of the condition of the market, overbought and oversold levels provide one of the best trading opportunities, Reliable and relatively simple to use (of course, only in comparison with the insanely sophisticated market analysis mechanisms), they are widely used by both professionals and novices. Therefore, let us look closer at signals that make it possible to identify overbought and oversold markets with higher efficiency.

Overbought and oversold levels describe two sides of the same coin. When an asset reaches an overbought level, its price most likely will not go up again. Conversely, oversold levels tell us about an extreme bearish pressure on the market, which may create a reversal point after which the price will rapidly go up. Price shifts happen all the time. The reasons behind them are incalculably numerous. Pretty much everything may affect the price of a certain asset: ranging from weather conditions to accidental tweets. Overbought and oversold indicators allow us to summarize certain factors, identifying the most likely price-shift scenario on the market.

Overbought markets signalize a bullish momentum for an extended period. With time the asset become too expensive, trading far above its intrinsic value. A sell-off becomes imminent.

An oversold market signalizes that the current price of an asset is too low. This situation becomes a natural result of prevailing selling pressure.

What is the difference between overbought and oversold signals

Identifying overbought and oversold signals is always a tricky task. Sure, a majority of experts consider them very reliable. However, false positives or early signals are a thing, and experienced traders may share hundreds of stories about a tremendously beneficial deal ruined by incorrectly identified market conditions. Therefore, how to identify them and make the right decision when to convert your assets? Firstly, an experienced eye may spot a trend just by watching a market. The price simply cannot go up or down indefinitely. There has to be a crucial point at which a reversal happens. For instance, if the price falls exceptionally rapidly and after that begins consolidating, this could be a clear indicator of an oversold market. Another semi-reliable indicator relies on support and resistance levels. For instance, oversold assets typically do not fall beyond their support level.

There is a wide specter of tools for advanced technical analysis, which may be used to identify overbought and oversold markets. The set of the most effective and yet comprehensive of them boils down to the following trio:

Probably the most popular indicator of overbought/oversold asset conditions in the current market of financial analytic tools, the Relative Strength Index (RSI) measures the strength of the current price against past prices. Hence, the values displayed by the RSI fall into the category of 0-100. Although it may be used for quite sophisticated analytic operations, new traders should primarily look for the 70-30 ratio as follows:

Curious traders may calculate this indicator themselves. However, there is no need to waste time: almost all modern trading platforms provide integrated tools for measuring the RSI automatically.

Here is another practical yet less reliable tool for identifying overbought and oversold markets: Moving Average Convergence Divergence (MACD). It is designed to measure the difference between two moving averages. Hence, when using MACD look for the following situations:

As for the key differences between the MACD and the RSI, they include the following factors:

Let us consider a practical example. You tend to keep your funds in Bitcoin and wait for the right moment for the next lucrative investment. Unfortunately, let us say for the purpose of our thought experiment that the current Bitcoin market is considered overbought. This means that the price is reaching its peak for the current market phase. The number of transactions is too high, and the asset simply cannot support them all. On the other hand, another cryptocurrency, let us say Ethereum, is considered oversold. Hence, it may be the right moment to visit Exolix, swap Bitcoin for Ethereum, and wait for a strong bearish trend.

Overbought and oversold levels provide convenient indicators, which allow experienced traders to predict the most likely scenario on the market. These levels are applicable in all types of financial markets, including even extremely volatile ones, such as the current cryptocurrency market. Traders usually make decisions based on the data gathered with the most reliable indicators, such as the Relative Strength Index (RSI), Stochastic Oscillator, and Moving Average Convergence Divergence (MACD). Inexperienced traders often tend to choose one of the described trends, fearing the other. However, it is meaningless to worry about which is better overbought or oversold: each trend may benefit a trader when incorporated into a reliable strategy.

What indicator is the most reliable?

Once again, all indicators work best when considered in combination. There is no “silver bullet” when dealing with overbought and oversold signals. Relying on a single indicator is hardly an advisable strategy in a long run.

What signal is better: overbought or oversold?

This dilemma comes with no correct answer. Both signals may be either exceptionally beneficial or exceptionally risky depending on the chosen trading strategy.

The RSI gives an oversold signal. Is it time to purchase?

It may be an indication of an oversold market. However, you should always wait for a confirmation signal and compare data gathered with the help of different tools before entering the trade. Remember that even the most reliable indicators deal with probabilities whereas all deals are a certainty.