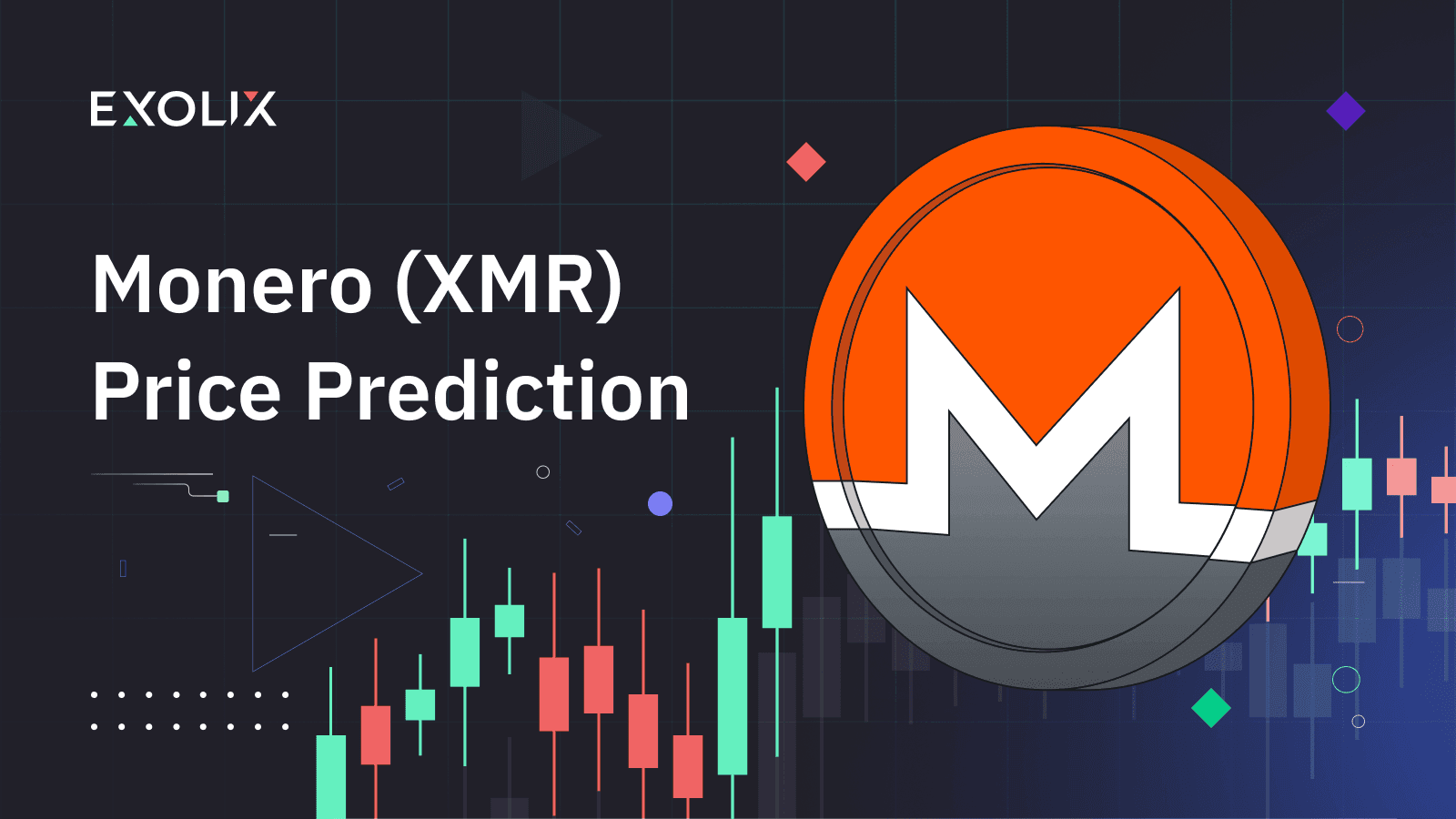 Security issues, possible tracking of financial transactions, and excessive control by banks and the state have meant that more and more people pay attention to the blockchain. A high degree of privacy, anonymity and decentralization have made Monero a favorite cryptocurrency in the blockchain industry.

Monero (XMR) attracts not only those who want to have anonymity but also traders who are looking for tokens with the potential for growth and development. It falls into the sphere of interest of both novice and experienced investors. In this article we will talk about blockchain developments, the latest news, and price forecasts. Let's take a closer look at the history of XMR and Monero price prediction.

What Is XMR Cryptocurrency?

Monero (XMR) is an open-source cryptocurrency. The launch of Monero (formerly BitMonero) took place in April 2014.Its protocol is based on the CryptoNote project code and implements unique methods of anonymization of transactions, namely hidden addresses and ‘ring’ confidential transactions. On the Monero network, only the transaction participants know the sent and received amount and the wallet addresses. Ring signatures were introduced in January 2017 as a must for all transactions.

Privacy-focused creators of Monero are working on the introduction of state-of-the-art technologies and solutions that could make a revolution in the crypto world. Such innovations mainly concern increasing the speed of token transfers and swaps and ensuring security while maintaining increased confidentiality of transactions.

For a better understanding of the advantages of the network, let's compare Monero with the key asset of the market - Bitcoin. On the Bitcoin network, transactions are processed sequentially, that is, one transaction follows another. Monero developers have implemented a system of dynamic blocks. It allows users to quickly confirm their transactions and keep the network fees low. The system is developed in such a way that it avoids queues of transactions, which increases their processing speed.

How to Buy Monero Coins?

To buy Monero, you do not need to take any unusual or complex actions. Monero can be purchased on any cryptocurrency exchange that supports it and is available in your region. This can be done in just a few steps:

Transactions on modern popular exchanges, such as Binance, KuCoin, or Kraken take place in a couple of seconds and with minimal fees. Choose the one you like and buy your first Monero coins easily.

In most cases, to understand the further movement of the price of a crypto asset, you need to refer to past data. Looking at the currency price history, you can approximately tell whether it is successful and what the trend (bullish or bearish) is now. Analysts consider in what price range the coin has been recently and determine the most promising entry or exit points. Hence, we can understand if Monero is a good investment today.

On May 21, 2014, Monero entered the market at a price of $2.10 according to CoinMarketCap. Cryptocurrency quickly gained value, but unfortunately, the price fell throughout 2014, closing the year at $0.4658.

The downward trend continued in 2015, setting the record low price of Monero at $0.213. Then traders witnessed a series of short-term increases, up to a significant jump that occurred from August - to early September 2016. The price reached $13.96.

2017 was the best year in the history of Monero's ascent. The market was in a bullish trend for a long time, and assets were bought off incredibly quickly, which increased their value. The peak price of $469.20 on December 19 was an incredible success in Monero's history.

The price of Monero has been falling throughout 2018, and even despite the prospect of recovery at the end of the year and the beginning of 2019, the coin spent most of the time two years below the $100 level.

Starting from September 2020, the coin was rapidly recovering its value - the end of the year and the beginning of 2021 were bullish. As a result, Monero pleased investors when it set its current all-time high on May 7, 2021, at $517.62.

Actual quotes and Monero price history you can find on the CoinMarketCap.

Monero (XMR) Forecast for the Long-Term

Technical indicators, technical and fundamental analyses, and consideration of trends and figures help to analyze cryptocurrencies. Traders tend to take into account the main patterns on which the price moves for forecasting. Let's see what analysts say about the prospects of the Monero price movement for the future.

Based on technical and fundamental indicators, as well as previous achievements of the cryptocurrency, analysts express hope for the growth of the currency by the end of 2022. In addition, significant market capitalization and reliable technologies play an important role in making the currency one of the most traded. Overall, most forecasts are positive, they do not indicate a possible loss in price in the near future. According to some price predictions, the Monero cryptocurrency may even hit $1000 by the end of 2025.

In the Government Capital Monero price prediction 2022 we see that it may increase by more than 70% by the end of the year and reach $350.

According to the WalletInvestor Forecast System, Monero's price may remain at its current level for a substantial period of time. XMR is expected to reach a maximum of $360 by mid-2022. However, XMR is a promising long-term (1-year) investment. Based on their experts’ opinions and technical analyses, a long-term rise is expected.

In accordance with the technical analysis of Monero made by Changelly, the prices expected in 2022 are the following:

If the near future is very favorable for Monero, then traders and investors become interested in forecasts for the distant future. Is it possible that the asset price will show a sharp negative trend and will not satisfy buyers? Let’s take a look at the XMR price prediction 2025.

The WalletInvestor experts have a positive outlook on the future of Monero. The price forecast for the year 2027 is $529.420. With an investment for five years, the revenue is expected to be around +226.27%.

By the experts in the field of cryptocurrencies, it is assumed that in 2025:

The further into the future we want to look, the less transparent it seems to us. After the analysis of the Monero prices in previous years, the XMR price prediction 2030 is as follows:

Should You Invest in Monero?

We are not entitled to make individual financial or investment recommendations. This forecast is not a call for investing in any cryptocurrency. We have made it for informational purposes only. Based on the above information and XMR price prediction, you can conclude whether Monero is suitable for your investments and your goals. We consider it necessary to weigh the pros and cons, compare the asset described in the article with other currencies, assess the market situation at the moment and keep up to date with the news. Please remember that the crypto world is always associated with risk, so you need to do your own research.

Does Monero Have a Future?

Monero uses the CryptoNote protocol to make the blockchain completely anonymous. Now it continues the trend towards development and the introduction of new products. Both technical and fundamental analyses of many crypto and blockchain experts say about the profitability of Monroe in the future. Forecasts look good both for this year and for the next 5-7 years. We can conclude that Monero XMR does have a future.

The content of this webpage is not investment advice and does not constitute an offer or recommendation for any investment product. Activities related to operations with tokens are associated with a high level of risk of complete loss of funds and other investments transferred in exchange for tokens. The legal regulation of transactions with tokens does not have a uniform approach, and the consequences of such transactions may have different legal assessments in different states. No information on the site is an exhaustive or complete statement of the issues discussed or related laws. DYOR.