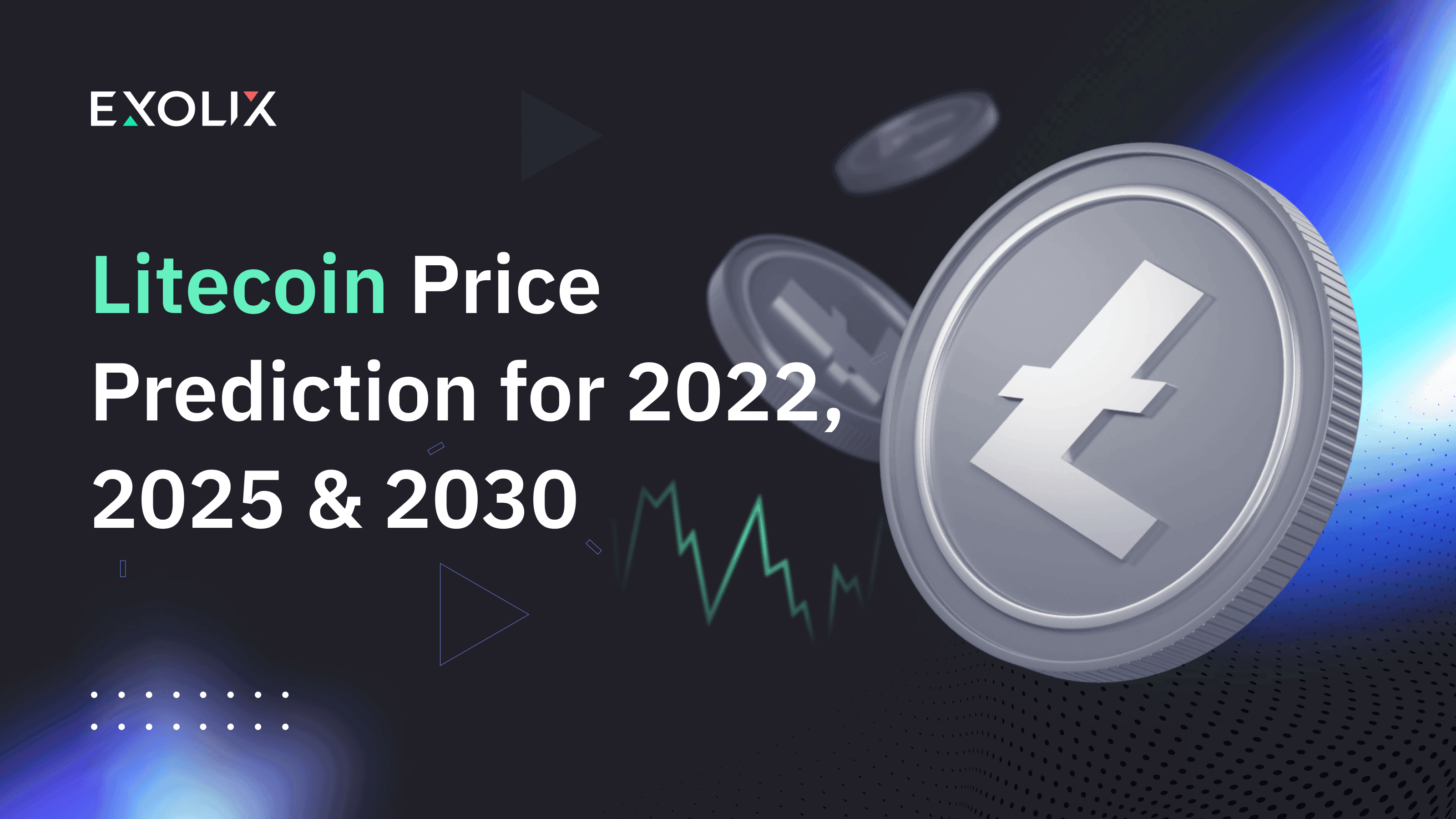 This alone means that there’s plenty of room for continued growth over the next couple of years, and we have to ask ourselves, what could LTC’s price be in 2025 and beyond?

In this article, we take a look at 3 different Litecoin price predictions for 2022, 2025, and 2030 to see if we can find out how much LTC will be worth in the near future.

What Is Litecoin Cryptocurrency?

Litecoin is a cryptocurrency that was created in 2011 as a fork of Bitcoin. The two are similar in most aspects, but Litecoin has a faster block time and a different hashing algorithm.

It was originally designed to allay the developer's worries that Bitcoin was becoming more centralized and to make it harder for major mining companies to dominate the mining process.

Like Bitcoin, Litecoin can be mined using ASIC miners. In a blockchain, transaction data is stored in blocks. The block is made available to any system participant (referred to as a miner) who requests to see it after it is checked by mining software.

After a miner confirms it, the chain’s next block is produced and Litecoin is awarded.

Although Litecoin ultimately failed to stop commercial miners from monopolizing the majority of Litecoin mining, the cryptocurrency has now evolved into a mineable coin and a peer-to-peer payment system.

Litecoin is one of the top-rated cryptocurrencies, and its price has fluctuated widely over the years. It has gained plenty of attention in the past few years as an alternative to Bitcoin, but how much will Litecoin be worth in five years?

No one can say with certainty, but if the Litecoin price prediction 2022 is any indication, this cryptocurrency has a bright future ahead of it.

How to Buy Litecoin

You can either purchase Litecoin using payment apps like Venmo and PayPal or wallets designed specifically for cryptocurrencies (for example Litewallet, the Android app on Google Play).

Payment apps (or a Litecoin-specific app) that let you purchase and sell Litecoin online are great for those who prefer technology, so they’re great for Gen Z.

The first and foremost thing to do is to confirm whether the cryptocurrency exchange supports Litecoin, which shouldn't be too challenging given how widely used it is.

Go for a crypto exchange that has the least (or no) transaction costs. Most exchanges will charge a small fee every time you purchase or sell your Litecoin.

Given that these are financial apps, security is one of the most important features to look out for. Make sure the crypto exchange or app you select has two-factor authentication, biometric verification, and one-time passwords (OTP) for every transaction.

Since crypto is still a new concept for many, even Gen Z may struggle with crypto platforms. It’s important to choose an exchange that has a user-friendly interface and a simplistic design, in addition to a 24-hour chat service, to ensure that you face minimal difficulties.

You can buy Litecoin coins on exchanges such as Coinbase, Binance, or Kraken. Before you get started, you will need to create an account and verify your identity before you can make a purchase.

Once you have done this, you can use fiat currency (USD, EUR, GBP) or cryptocurrency to buy Litecoins. The price of Litecoin is currently around 51.25 USD per coin.

Litecoin was created in October 2011 by Charles Lee.

It was a fork of the Bitcoin Core client, differing primarily by having a decreased block generation time (2.5 minutes), an increased maximum number of coins (84 million), a different hashing algorithm (scrypt, instead of SHA-256), and a slightly modified GUI.

See the price history, trends, and fluctuations of the coin below:

May 2017: Litecoin became the first of the top-5 (by market cap) cryptocurrencies to adopt Segregated Witness

December 29th, 2018: Litecoin faced a steady downward trend from over $60 at the beginning of December to approximately $30 as the end of the year approached

During the COVID-19 pandemic, the coin lost much of its value and only regained it in April 2021, when it reached $255, its highest price ever

Litecoin is an established cryptocurrency that has been around for a while. Many features have been added to its platform over time, with more still to be added.

Although its market share is shrinking, the majority of cryptocurrency specialists predict that Litecoin's value will rise over the next several years.

Some researchers predict that Litecoin will eventually hit $500. Given the present price of this cryptocurrency, you can expect to make money in the future, especially in the long term.

The price outlook for Litecoin in the short run is typically pessimistic. For instance, Long Forecast anticipates that LTC will trade in the $80–$90 range for the majority of 2022.

Trading Beasts, on the other hand, anticipates a price of $108 by the end of the year. However, analysts at Digital Coin Price are more upbeat and predict that by the end of this year, the price of LTC could peak at $245.9.

In a similar line, CryptoNewsZ does not completely discount the likelihood that Litecoin may hit $330 this year. Changelly predicts that Litecoin will be priced at $80.43 in accordance with forecasting tools.

The values of Litecoin and its fluctuations have been analyzed by professionals in the field of cryptocurrencies.

Other analysts, who are more circumspect, predict that the price of LTC would hover around $425 in 2025.

After studying the Litecoin price for years, some crypto professionals have already shared their LTC price predictions for 2030. They expect it to trade for a minimum of $1,572.50, with $1,933.41 as the potential peak price.

As a result, you can anticipate that in a decade, Litecoin will be an estimated $1,617.92.

However, at the same time, many experts have refused to give a prediction for a decade from now.

Due to the numerous unanticipated circumstances that may have a long-lasting impact on the price of the cryptocurrency, such predictions are challenging to make. However, Coin Price Forecast provides Litecoin’s price prediction for the year 2030.

Should You Invest in Litecoin?

There are several reasons why you might want to invest in Litecoin. These include:

Stability: Despite the volatility of the crypto market, Litecoin is a relatively stable cryptocurrency, which means you won't lose your investment value as easily because prices don't swing as wildly as compared to other coins.

Usage: More people are investing in Litecoin than ever before because more businesses and merchants accept it.

Supply: Last but not the least, there's no cap on how many Litecoins can be mined - so the supply will continue to grow indefinitely.

What Is the Future of Litecoin?

Litecoin is a very well-known cryptocurrency as it currently ranks in the top 20 cryptocurrencies by market capitalization. However, at the same time, it is important to note that it used to be ranked 5th in the market cap and has lost that position.

The price of the coin has been falling steadily throughout 2022. Despite this, most experts have an optimistic prediction while others believe that the price will remain steady, if not increase.

Regarding the correctness, accuracy, and dependability of this material, we make no guarantees. The crypto market experiences frequent irrational fluctuations and severe volatility.

Before making an investment, any investor, trader, or everyday cryptocurrency user should consider all points of view and become familiar with all regional legislation.