Is Baby Doge Coin a Scam or Not?
HomeBlogArticle
Investing

Is Baby Doge Coin a Scam or Not? 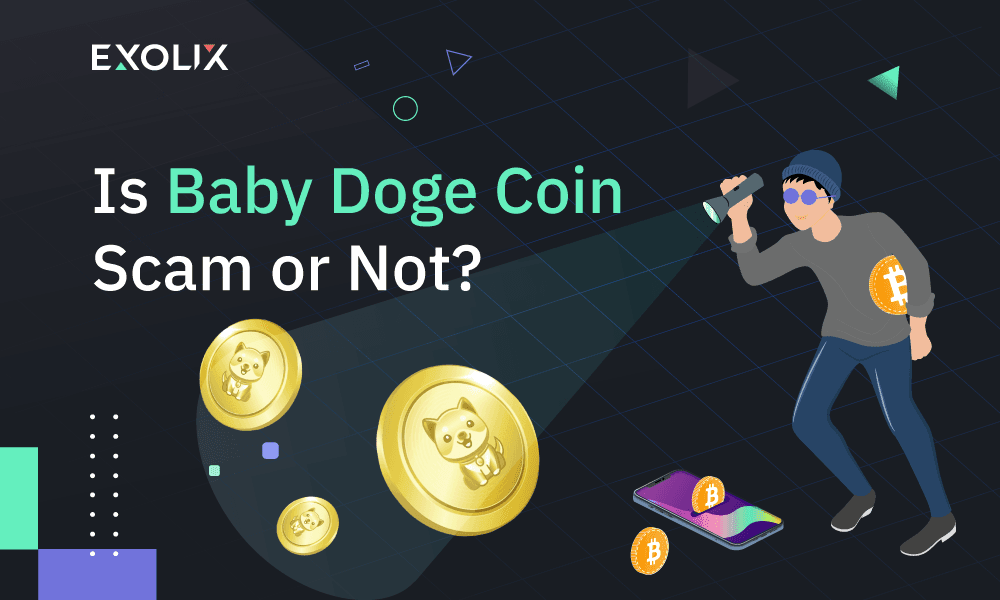 The widespread excitement around the baby Doge Coin is not shocking. The price increased by 1,000% in the first two weeks after its introduction on June 1, 2021. The market capitalization reached a staggering $200 million by the third week; by the fourth week, 160,000 people were in possession of the coin.

As its popularity quickly grew, it was clear that people were interested in purchasing baby Doge currency. But is baby Doge Coin a scam? Should we put our money into it? Should you avoid this passing trend, or is baby Doge currency here to stay? Explore the following guide compiled by Exolix to learn more.

Before answering is baby Doge Coin a scam, let us understand what this currency is. The online Dogecoin community invented baby Doge Coin, with "Doge" being a hilarious misspelling of "dog." The site copy reads, "Baby Doge wants to show off to his dad his new, increased transaction speeds and adorableness".

As a hyper-deflationary token, Baby Doge Coin ought to increase in value as its supply decreases. The goal of a hyper deflationary token is to limit the total number of tokens in circulation to a fixed value and its design is built in order to achieve this goal. One major advantage of this concept is that it limits the influx of new tokens into the market as their creators mine, generate, or sell more of them. This means that the token will gain in value over time.

To control inflation, baby Doge does not just destroy coins but instead rewards holders with new coins whenever they make a purchase or deposit funds to the decentralised exchange PancakeSwap as part of a liquidity pair.

Charity organisations also benefit from redistribution. As stated on their website, the creators of baby Doge currency have given over $750,000 to organisations like the Humane Society, the ASPCA, Paws with Cause, the North Shore Animal League, and many others that support dogs.

Is baby Doge Coin legit? Yes. However, there is only 115.114 quadrillion baby Doge in circulation from a total of 420 quadrillions that can ever be created. As of August 1, Baby Doge had burned one quadrillion coins worth $1.3 million, making it the tenth burn of one quadrillion or more coins this year. This brings the total amount burned so far to 46% of the maximum supply.

Some have argued that Baby Doge is superior to Dogecoin due to the latter's unlimited coin supply. But a coin with no real use and a maximum of 420 quadrillion coins cannot be deemed rare, even after nearly half of them have been burned. For instance, Bitcoin's genuine scarcity comes from the fact that the maximum supply is only 21 billion coins and that more than 19 billion of them are already in circulation.

Is Baby Doge Coin Real and Why Is It Not Listed on Binance?

Many people wonder if baby Doge Coin is a scam. The answer is no - it is a real coin. However, baby Doge's creators are unboxed in the same way that Shiba Inu is. The fact that Baby Doge hasn't been doxed is the only real red flag of the token. Apart from that minor issue, the token has performed admirably.

The coin can only be traded on the Binance platform, thus signing up for an account there is a prerequisite. Despite the fact that Baby Doge isn't traded on any major exchanges, you can get some on Binance's decentralised exchange (DEX), PancakeSwap.

You'll need BNB tokens in your cryptocurrency wallet before you can use PancakeSwap. Binance Coin may only be purchased on the Binance Exchange, so a Binance account is required to get started.

In their whitepaper, the creators of Baby Doge Coin describe the token as "a fun meme with a serious aim to rescue puppies in need, promote crypto adoption to the mainstream with novel concepts such as prizes, NFTs, decentralised exchanges, and credit card for crypto payment on our website". The coin, however, is not particularly useful in the present. The baby Doge group does not disclose how many, if any, retailers actually take baby Doge as payment, even though a listing on CoinPayments makes it possible for Shopify, WooCommerce, and Magento businesses to do so.

So, what exactly can you do with a baby Doge Coin? You can convert and collect it. People who collect it do so in the hopes that the coin's value will rise and because they appreciate being a part of a passionate group that loves dogs. Baby Doge Coin's worth is based on the collective sentiment of its users rather than any inherent characteristics of the token itself.

It's hard to imagine a better meme coin than the Baby Doge Coin. You won't find a more reliable coin. There have been two audits of the token, and both have passed. Surprisingly huge numbers of people own Baby Doge Coins. There is no ambiguity about what it's supposed to do.

Baby Dogecoin is definitely not a scam, but it is possible that some types of investors will find it unappealing because it has diverged so significantly from its initial purpose. Nevertheless, it is a very promising token that is likely to gradually achieve general adoption.

Is baby Dogecoin legit? Yes, but if you are thinking of investing in baby Doge, do your homework and only invest what you can afford to lose, as the cryptocurrency market is highly volatile.

What Is the Market Cap of Baby Doge?

At the time of writing, the total value of all Baby Doge in circulation was $472,247,626. It&apos;s a great number for a token that&apos;s only been around for a little over half a year. All the more so when one considers that we are in a bear market at the moment.

What Is the Transaction Fee for Baby Doge?

Each trade carries a 10% fee during transactions that are split in half. The token&apos;s current holders will receive a 5% share of the token&apos;s total value as a redistribution for their loyalty. The remaining 5% is distributed as follows: 50% of it is converted into BNB by the contract, and 50% of it is distributed as BABY DOGE tokens and BNB as a liquidity pair on Pancake Swap.