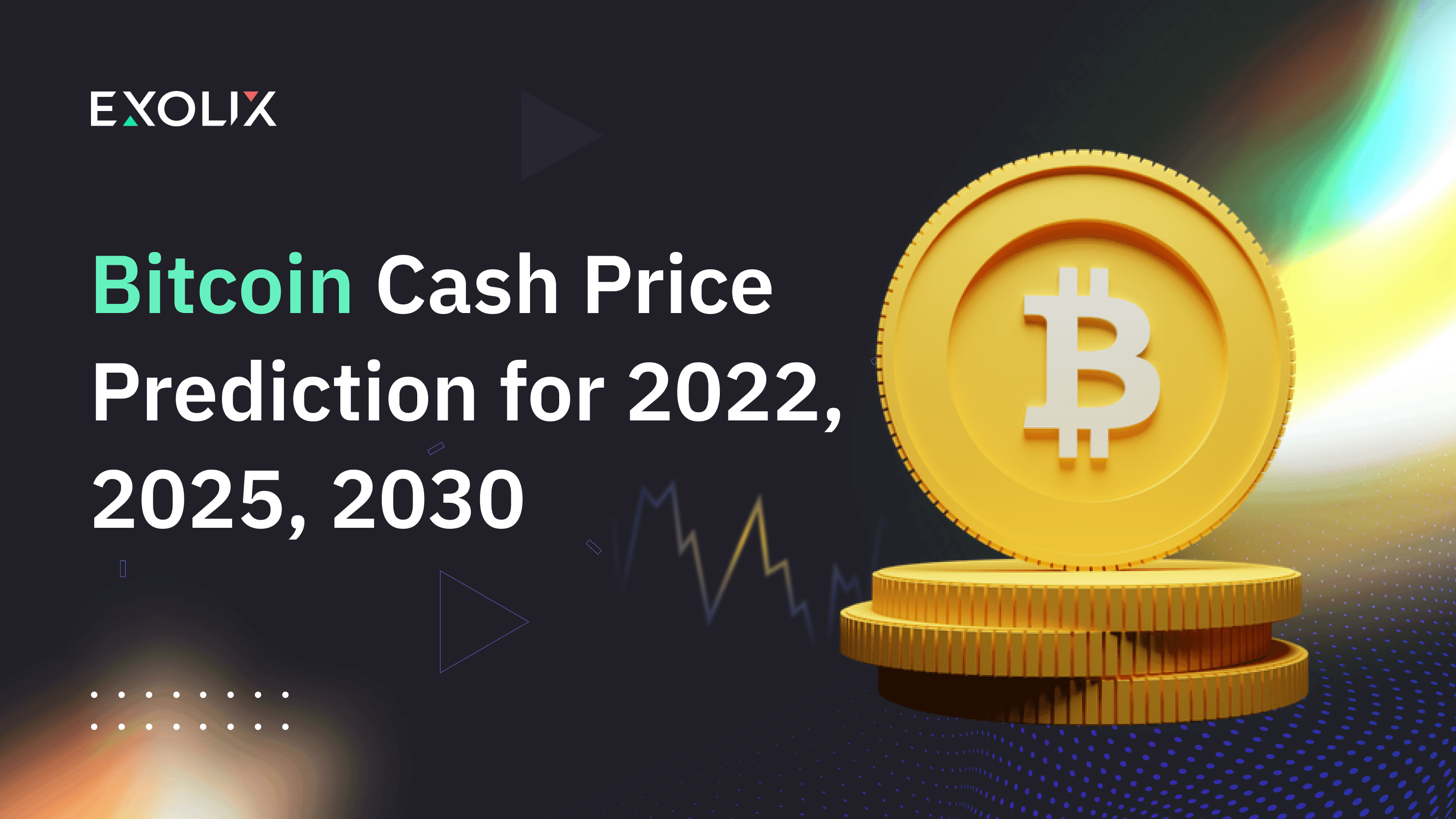 One of the cryptocurrencies that many people have heard of but don't fully understand is Bitcoin Cash. BCH is still frequently regarded as nothing more than Bitcoin's inferior and is only brought up when talking about Bitcoin forks. Nonetheless, it is one of the 30 largest cryptocurrencies in the world and has shown considerable promise.

It is difficult to predict if Bitcoin Cash will be a good investment or not, just like with any other cryptocurrency. However, its large market value, strong technical base, and excellent potential usefulness can help to keep its price afloat in the event of a market crash.

If you're looking for Bitcoin Cash price prediction from 2022 through 2030, or if you simply want to know where the price of BCH is expected to go, read on. We'll examine Bitcoin Cash's (BCH) past price movements and see what industry insiders think will happen to its price in the future.

What is Bitcoin Cash Cryptocurrency?

Bitcoin Cash is a hard fork of the original Bitcoin. The decision of powerful miners, developers, investors, and users who opposed the SegWit2x consensus led to its appearance in August 2017. It is now a decentralized P2P payment mechanism. "A coin for everyday transactions" is the concept behind BCH.

The block size for Bitcoin Cash has been changed by the cryptocurrency's creators to support more transactions and increase the currency's scalability. As a result, they raised it from 1 MB to 8 MB. This enabled the coin to decrease transaction fees while boosting transaction throughput. Since then, it has grown much more, and at this time, one block is equivalent to 32MB.

BCH gained popularity quite fast after its creation. In less than a month, close to 1,500 blocks were created. Mining pools like Antpool and ViaBTC recognized this cryptocurrency and directed large amounts of hash rate into mining BCH.

Bitcoin Cash today is not the same coin that it was in 2017. BCH underwent a hard fork of its own in 2018 when it split into Bitcoin SV ("Satoshi's Vision") and Bitcoin ABC (now known as Bitcoin Cash). The community split because of disagreements over the cryptocurrency's future, particularly concerning block size.

How to Buy Bitcoin Cash?

Following is an explanation of the two most common methods for buying Bitcoin Cash:

The most popular place for new cryptocurrency investors to purchase BCH is on a cryptocurrency exchange. It only takes a few clicks to buy Bitcoin Cash (BCH) using your local fiat currency (conventional money like the dollar, euro or pound) or another cryptocurrency, depending on the platform and its services available in your region.

P2P refers to transactions in which one user transacts with another user directly, without an intermediary. To buy Bitcoin Cash in this manner, one must first locate a service that will put them in touch with sellers of BCH tokens (local currencies). Fewer fees for transactions and quicker payouts are two primary benefits of this system.

A user of a P2P trading platform, like a cryptocurrency exchange, will often deposit some amount of fiat currency with the site before making a P2P deal. The platform will then match the buyer with a seller who is looking to liquidate their BCH holdings and facilitate the peer-to-peer exchange.

The initial price for 1 BCH was around $200. Even at this rate, the cryptocurrency quickly climbed to the top of market capitalization charts. The following day, the rate doubled. For three weeks, the price remained constant until increasing to $1,000. The price instantly dropped to $700, indicating that the community believed it was a planned increase.

A long, smooth drop can be seen. The price per BCH reached the $317 threshold in the middle of October 2017. Then, there was a major reversal, which caused BCH to increase to $1,600.

The market increased significantly after that. Each cryptocurrency had a 400% increase. Some price increases reached a whopping 1,000%. In the middle of December, Bitcoin Cash reached its peak price of $4,091 per coin.

Beginning on December 22, when all projects, including Bitcoin, Waves, and others, started to lose value, the crypto market entered a black period. Before seeing a significant price increase to $1,500 at the start of May 2018, when the market declined once more, Bitcoin Cash's price dropped to $1,000.

Because prices were so low, the previous winter was the worst for the market for cryptocurrencies. At that time, the price of Bitcoin Cash was $80. It increased little, reaching $534, before declining once more. With the rise in cryptocurrency prices in May 2021, Bitcoin Cash reached its highest price since it traded at over $1,800 in April 2018. But it was impossible to keep up. Since then, the price has dropped back to about $400, which was below its initial price, and is currently trading at about $116.

In a world where cryptocurrencies and digital payments are increasingly seen as the future, Bitcoin Cash has a lot of promise, thus it is crucial and worthwhile to predict how the coin's value will increase.

The price predictions also differ significantly since some people firmly believe that Bitcoin Cash is the real Bitcoin and should be treated as such, while others think it is a useless cryptocurrency that is not as worthy as it is claimed to be.

One of the most reputable forecasting websites on the planet, Wallet Investor, projects that Bitcoin Cash will reach $1,587 during the next five years. This implies that the 2021 peak was the highest point over the following few years.

According to the Economy Forecast Agency, Bitcoin Cash might go as low as $1.06 in 2023. Perhaps Bitcoin Cash will continue to experience problems within its community and become even less well-known than Bitcoin itself.

Cryptocurrency analysts are prepared to provide their predictions for the price of BCH in October 2022. During this month, the least trading cost might be $146.91 and the maximum could be $158.19. It is anticipated that Bitcoin Cash will typically be worth roughly $153.96.

The average BCH rate, according to crypto experts that have studied past and future price fluctuations of the cryptocurrency, maybe around $158.58 in November 2022. It may decrease as low as $152.94. The most probable amount is $165.88.

The prices of Bitcoin Cash and their fluctuations over the previous years have been evaluated by experts in the field of cryptocurrencies. BCH price prediction 2025 will be $516.52, and the maximum price will be $602.08. The average trade cost will be roughly $531.00.

Should You Invest in Bitcoin Cash?

If you think that Bitcoin Cash's scalability and speedier processing will promote widespread adoption, it can be seen as a wise investment. Or you may think BCH will gain from its connection to Bitcoin.

Many industry professionals and traders think that Bitcoin Cash has long been a solid investment. The value is surprisingly growing. As a result, it is assumed that the investment will generate a healthy return.

What is the Future of Bitcoin Cash?

The fact that Bitcoin Cash is currently the most successful hard fork in Bitcoin history may make predictions for it optimistic. It is 2.544 Ehash/s for the entire hash rate. This demonstrates that mining pools are attempting to support and believe in the future of BCH. The volume of trading each day exceeds $2 billion. Therefore, traders also have faith in this project.

Because BCH's fees are lower, it may become more stable and see an increase in transaction volume. This might have a beneficial effect on people's perceptions of cryptocurrencies and prompt a slight increase.

In some nations, including Australia, BCH has an advantage over fiat. Forecasters anticipate sustained growth based on upcoming Bitcoin Cash-related ventures. And with cryptocurrencies being used more widely across the globe, we can also see a potential for greater price performance in the upcoming years.

The information presented above is not intended to be used as investment or financial guidance. Nothing in this post should be taken as trading or investment advice; it is the author's opinion alone. Regarding the accuracy, completeness, and reliability of this material, we make no warranties.

The cryptocurrency market is affected by excessive volatility and unpredictable fluctuations. Before putting money into cryptocurrency, investors, traders, and everyday users should gather as much information as possible, consider different perspectives, and get familiar with applicable laws in their region.