Bitcoin ATMs: What You Need to Know Before Buying Bitcoin at an ATM
HomeBlogArticle
Academy

Bitcoin ATMs: What You Need to Know Before Buying Bitcoin at an ATM 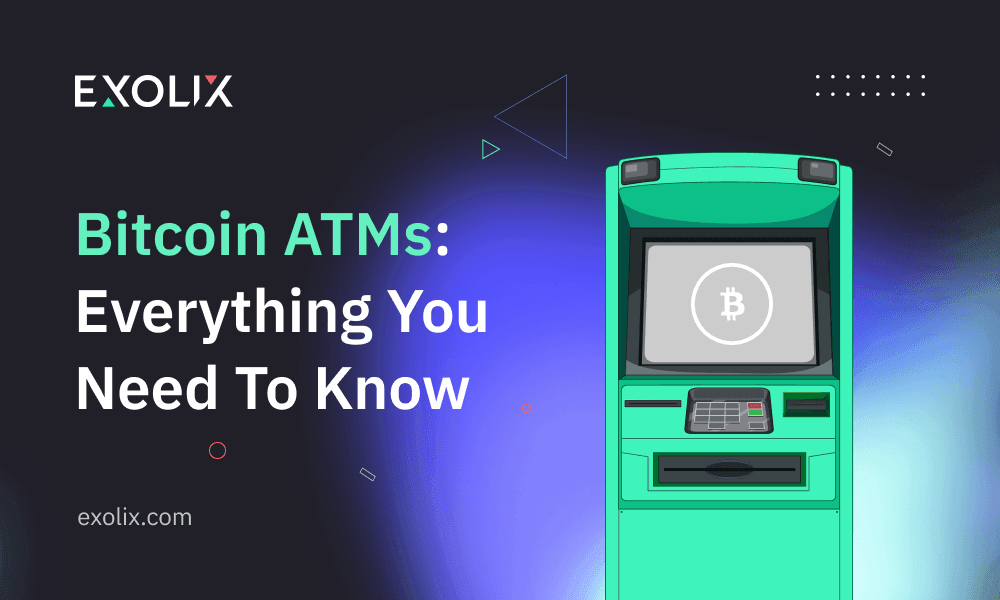 What Is a Bitcoin ATM and How Does It Work?

A terminal, such as an ATM or BTM, is identical to a standard ATM. It differs from traditional ATMs because it enables customers to purchase Bitcoin in exchange for cash or a bank card. Users may also sell Bitcoin for cash at some BTMs.

On February 18, 2014, the very first US Bitcoin ATM was set up in Albuquerque, New Mexico. That ATM was operating for only one month before being shut down.

Depending on the transaction amount, the Bitcoin ATM may require your mobile number to deliver an SMS confirmation code. You may be required to verify your ID before the transaction. The amount limits, as well as specific identification and security requirements, may vary significantly for different ATM operators.

Furthermore, many Bitcoin ATMs no longer provide the anonymity they formerly offered. This is due to legislation that requires people to prove their identities before dealing, particularly with significant sums.

90% of worldwide Bitcoin ATMs are located in North America.

Bitcoin ATMs: How Do They Work?

Bitcoin ATMs, or BTMs, are divided into two categories:

To enable the conversion of Bitcoin into cash, BTMs must be connected to the internet. BTMs generally transfer funds using a public key on the blockchain network. Country- and operator-specific Bitcoin ATMs may require you to scan government-issued ID, especially when processing large sums.

What Do You Need to Use a Bitcoin ATM for?

Bitcoin transactions made via ATMs are conducted on the blockchain network, the same as all other crypto transactions. BTMs use a QR code to transfer crypto to your Bitcoin wallet. Banks do not control them because they are not linked to a bank account. Despite this fact, they are still subject to similar rules and restrictions issued by country-specific governmental financial regulators.

Visitors are required to enter/scan the QR code of their Bitcoin wallet address. The acquired Bitcoins can then be sent to the wallet. Within a few minutes of the execution, the transfer will appear in your crypto wallet.

Depending on the specific BTM, you can either buy or sell Bitcoin. However, in most cases, buying or selling Bitcoin is similar to accepting cash with a bank card.

What Is a Bitcoin ATM Used for?

Let’s explore the benefits of a Bitcoin ATM:

Disadvantages of Using a Bitcoin ATM

Ultimately, if you want to buy or convert a certain amount of Bitcoins and don’t mind paying considerable fees, a Bitcoin ATM might be a viable option for you—assuming there are BTMs in your region. Alternatively, using the Exolix exchange or buying Bitcoin through any type of channel you currently have are also both viable solutions.

There is, however, important information you should know regarding Bitcoin ATMs. While Bitcoin ATMs have existed for some time, they remain an exciting phenomenon that causes both interest and skepticism.

Where Can You Find Bitcoin ATMs?

Crypto ATMs may be found all over the world; however, the major part of them are in the United States. Numerous apps monitor the locations of crypto ATMs.

There are more than 34,000 crypto ATMs in the United States alone, and even more in Canada. There are tens of Bitcoin ATM operators, each with their own set of features and functionality. The top three operators in the US are Bitcoin Depot, CoinCloud and COINFLIP, which manage almost half of all Bitcoin ATMs nationwide.

How Do You Use a Bitcoin ATM?

First, you find a BTM, which may look very similar to a regular ATM. Before proceeding with your transaction, you are usually asked for your phone number to obtain a verification code.

Every BTM must have some form of identity verification, including scanning a government-issued ID and/or confirming a phone number, as required by law. Confirm your identification with the verification code sent to your phone number. Then, enter that passcode into the BTM. This measure was included by BTM operators to discourage users from entering fake phone numbers into the machines.

A Bitcoin address is required to use a Bitcoin ATM. The QR code defines your wallet address; therefore, you must scan it to instruct the Bitcoin ATM where to transfer your BTC.

4. Insert cash and verify the amount

At this step, you produce the amount of cash you want to exchange for Bitcoin. You just insert your money into the machine’s designated slot, similar to a traditional ATM that takes cash deposits.

Because it takes several network confirmations to conduct the transaction, this could take up to an hour for the crypto to be shown in your account.

A Few Fascinating Facts Regarding This Technology

As the world becomes more digital, especially in the field of financial transactions, the crypto industry is projected to grow at an annual rate of 59% from 2022 to 2027, according to a recent report published by Research and Markets. They expect the crypto ATM market to grow from its current $46.4 million to $472 million over the coming five years.

BTMs are popular because they are easy to use, convenient, and innovative. Bitcoin ATM charges are one of the key issues. However, the BTM fees will most definitely go down as healthy market competition grows.

If you intend to purchase, sell, or swap Bitcoin for fiat in a Bitcoin ATM, do your research first to determine which Bitcoin ATMs have the lowest fees. Also, make sure that you enter the correct information, as there is no way to reverse or cancel the operations, even if there are mistakes.